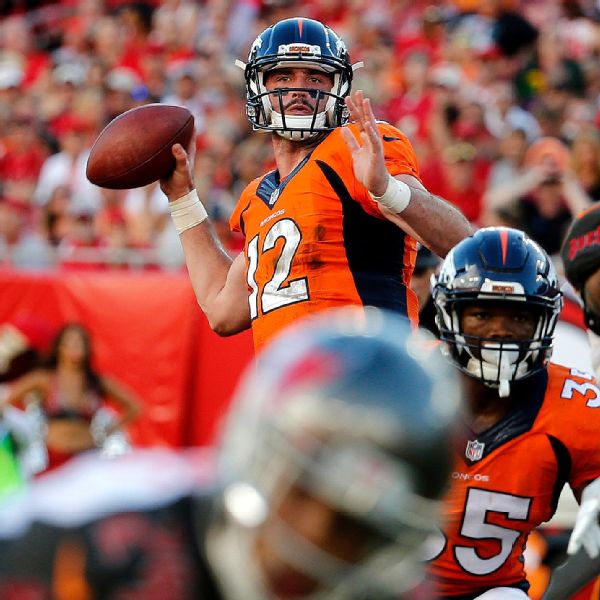 After Friday's practice, Broncos coach Gary Kubiak said he wanted to see Siemian throw at the team's practice Saturday morning. Several team sources said Siemian showed some improvement in that session, but it was clearly not enough to satisfy Kubiak, so Lynch was told he will start against the Falcons.

Denver's 9News first reported that Lynch would get Sunday's start.

As of early Saturday evening, Siemian also was expected to be among the Broncos' inactives Sunday, so Austin Davis would serve as the team's No. 2 quarterback.

Siemian suffered a bruise to his non-throwing shoulder just before halftime of last Sunday's 27-7 victory over the Tampa Bay Buccaneers. He was held out of practice Wednesday, but he threw Thursday and Friday, showing improvement each day.

Lynch, who was 14 of 24 for 170 yards and a touchdown in just over a half of work against the Buccaneers, will get his first career start. Lynch took most of the work with the starting offense this past week as the Broncos had tried to prepare for the possibility he would have to start against the Falcons.

Lynch will face a Falcons team that is ranked 30th in the league in total defense, 31st in pass defense and tied for 31st in sacks with just four.

The Broncos traded up from the 31st pick in April's draft to select Lynch at No. 26. He was the third quarterback taken, behind Jared Goff and Carson Wentz.

On Friday, Kubiak said Siemian's practice on Saturday would have a lot to say about who the Broncos would play at quarterback.

"We've got 48 hours here, we'll see how he is [Saturday],'' Kubiak said Friday afternoon. "... We'll probably work him [Saturday] more than we normally would a player on Saturday just to take a look. He's made progress every day.''

When Kubiak was asked how he would decide whether Siemian would play, the coach said it would be determined by the eye test.

"Me watching him move, watching him make all the throws,'' Kubiak said. "We moved him around some [Friday], which is something we didn't do [Thursday], so just go back and look at the big picture.''

Siemian suffered the injury when he was sacked by Buccaneers defensive tackle Clinton McDonald just before halftime. To make the tackle, McDonald swung Siemian around and tossed him down directly on the left shoulder.

The Broncos have won all four of Siemian's starts, and he has thrown for 824 yards to go with six touchdowns and three interceptions. Kubiak has answered questions about Siemian's future -- when he's cleared to play -- with "Trevor's our starter,'' but the Broncos have a quick turnaround after Sunday's game as well.