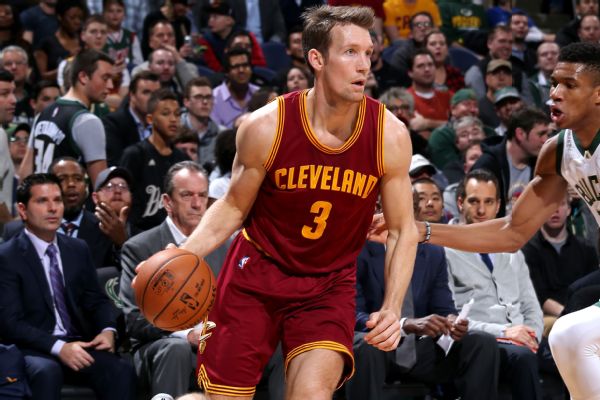 Newly acquired Mike Dunleavy has yet to report to the Atlanta Hawks after being dealt to the team in the Kyle Korver trade on Saturday, according to league sources.

Sources told ESPN.com that Dunleavy is seeking a buyout from the Hawks that would enable him to immediately become a free agent.

The sides, according to one source, were "working through it" Sunday.

The Cleveland Cavaliers and Hawks verbally agreed to a Korver trade on Thursday and made it official Saturday. Atlanta received Dunleavy, Mo Williams and a protected 2019 first-round pick in exchange for Korver, the 35-year-old perimeter specialist.

According to league rules, a player has 72 hours after a tradeto report to his new team and complete a physical.

Hawks coach and team president Mike Budenholzer, speaking Saturday to reporters in Dallas, acknowledged the Hawks aren't expecting Williams to join them since he has essentially retired. But he does have high hopes for what Dunleavy, 36, could add to the team in the wake of Korver's departure.

"We'll bring him in," Budenholzer said Saturday of Dunleavy after the Hawks' shootaround in Dallas. "I think he's got the type of game and a skill set that I think he could be very good playing for us. We'll just have to see how he is, integrate him, continue to build. He's a player who we've liked, and personally I've liked, for a long time. We'll see how he fits into our mix."

Dunleavy is earning $4.9 million this season and his $5.2 million contract is only partially guaranteed next season.

Dunleavy appeared in 23 games for the Cavs this season and averaged 4.6 points and 2.0 rebounds. The 14-year veteran has career averages of 11.4 points and 4.3 rebounds in stints with Golden State, Indiana, Milwaukee, Chicago and Cleveland, which acquired him in July.

The Cavs packaged Dunleavy and Williams' contract to acquire Korver, one of the league's most feared 3-point shooters, to help fill the void created by J.R. Smith's recent thumb surgery and expected three-month absence.

Korver is earning $5.2 million this season in the final year of his contract and is averaging 9.5 points per game while shooting 40.9 percent from 3-point range. He was one of four Hawks to earn All-Star status in 2015 as part of Atlanta's 60-win season.

Korver is in Phoenix with the Cavs but is unable to play or even watch the team's game against the Suns from the bench because Dunleavy's physical hasn't been completed. The Cavs hope the medical exam will be done by tomorrow so Korver can go through his first practice with the team.

The Cleveland first-rounder sent to Atlanta in the Korver trade is top-10 protected in 2019 and 2020. If the pick is not conveyed to the Hawks in either of those years, Atlanta will instead receive second-round picks from the Cavaliers in both 2021 and 2022.