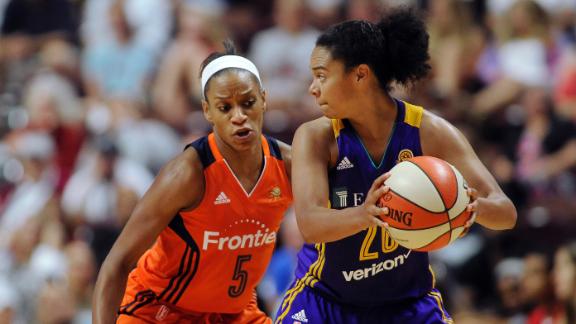 UNCASVILLE, Conn. -- Jantel Lavender scored a career-high 25 points and the Los Angeles Sparks beat the Connecticut Sun 98-92 in overtime Friday night to tie the 1998 Houston Comets for the best start in WNBA history.

Lavender added a season-high 10 rebounds, and Kristi Tolliver scored eight of her 24 points in overtime for the Sparks (20-1). They've won nine in a row and are 9-0 on the road.

The Sun's Alyssa Thomas made 1 of 2 free throws with 10 seconds left in regulation to force overtime. Tolliver missed a 3-pointer as time expired.

Connecticut led 62-46 with 8 minutes left in the third quarter, but Nneka Ogwumike scored nine points during a 16-2 run that pulled the Sparks within two. Los Angeles took its first lead, 81-80, on a 3-pointer by Ogwumike with 1:37 remaining in regulation.

Ogwumike finished with 22 points and 10 rebounds.