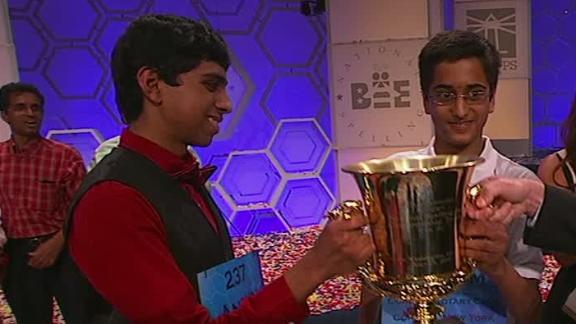 OXON HILL, Md. -- The dreaded bell that signals a misspelled word tolled for each of the last two spellers in the Scripps National Spelling Bee on Thursday night. But in an exhilarating twist, it wasn't the end for either of them.

Sriram Hathwar of Painted Post, New York, and Ansun Sujoe of Fort Worth, Texas, got back-to-back words wrong, each giving a reprieve to the other. Neither stumbled again, and a dozen words later, they ended up as co-champions of the bee, the first tie in 52 years.

"The competition was against the dictionary, not against each other,'' Sriram said after both were showered with confetti onstage. "I'm happy to share this trophy with him.''

Ansun said afterward that he knew the word Sriram got wrong: "corpsbruder,'' a close comrade. Ditto for 14-year-old Sriram, who said he was familiar with "antigropelos,'' which means waterproof leggings. That word dashed 13-year-old Ansun's chance for an upset victory.

Finally, only four of the 25 championship words remained. Two had to be kept in reserve so the bee wouldn't end with an incorrect spelling.

Sriram's last word was stichomythia, a theatrical term for dialogue representing an altercation and delivered in alternating lines.

Sriram rarely appeared flustered, nodding confidently when he got a word he knew. Ansun was more nervous and demonstrative, no more so than on the word that gave him a share of the title: "feuilleton,'' the features section of a European newspaper or magazine.

Upon hearing the word, Ansun opened his mouth wide, grimaced and rolled his eyes. As the stage lights turned red, signaling he had 30 seconds left, he said, "Ah, whatever!'' before beginning to spell.

They became the fourth co-champions in the bee's 89-year history and the first since 1962. Although they hoisted a single trophy together onstage, each will get one to take home, and each gets the champion's haul of more than $33,000 in cash and prizes.

They also got a shoutout from President Barack Obama ("bo") via the White House's Twitter feed:

Congrats to Ansun and Sriram, the incredible co-champs of the #ScrippsNationalSpellingBee. You make us all proud! -bo

- The White House (@WhiteHouse) May 30, 2014In addition to their shared love of spelling, both boys play double-reeded instruments: oboe for Sriram, bassoon for Ansun, who also plays piano and guitar and has perfect pitch. Sriram's parents are both physicians, and he hopes to become an ophthalmologist.

Both champions also are Indian American. The past eight winners and 13 of the past 17 have been of Indian descent, a run that began in 1999 with Nupur Lala's victory, which was later featured in the documentary "Spellbound.''

With only one previous appearance in the bee, Ansun said he looked up to Sriram.

Said Sriram: "I guess a veteran and, let's say a rookie, it's pretty cool.''