Spurs' Manu Ginobili out for ankle 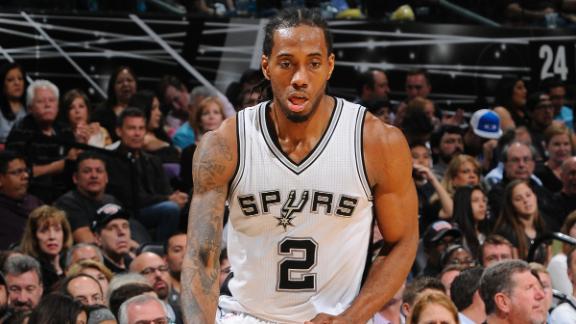 SAN ANTONIO -- The San Antonio Spurs lost Manu Ginobili to a sprained right ankle in the third quarter of a 123-97 victory over the Minnesota Timberwolves on Sunday night.

Ginobili was injured when he went up for a one-handed rebound and landed on the side of Gorgui Dieng's left foot with 43 seconds left in the period.

"He will be out for a good week, I'm sure," said coach Gregg Popovich, whose Spurs play four of their next five on the road. "A week to 10 days."

Ginobili remained on the court for a couple of minutes, rocking on his side and holding his right ankle in agony. He was helped to the back by Tim Duncan and Spurs trainer Will Sevening, hopping on his left foot and not putting his right foot on the floor.

"Fortunately, it's not as bad as they thought," Duncan said. "Hopefully he can be back pretty quickly. We need what he brings to our game."

Ginobili was one of eight Spurs in double figures, finishing with 11 points. San Antonio shot 58 percent from the field and set a season high with 38 assists.

The Spurs (41-24), who were coming off a 128-125 overtime loss to Kyrie Irving and Cleveland on Thursday night, moved into fifth place in the Western Conference for the first time since Dec. 14.