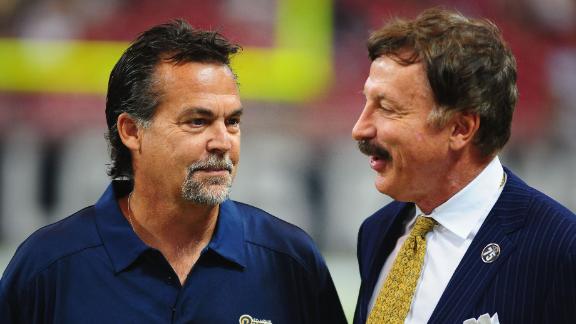 ST. LOUIS -- City officials said Wednesday that the owner of the Rams isn't returning their calls, so they plan to work directly with the NFL on efforts to keep a team -- any team -- in St. Louis amid speculation the Rams are headed back to Los Angeles.

Rams billionaire owner Stan Kroenke is part of a joint venture that announced plans Monday for an 80,000-seat stadium in the Los Angeles suburbs, a move that could soon return the NFL to the nation's second-largest market and the home of the Rams from 1946 until they moved to St. Louis in 1995. The move would have to wait at least a year; the NFL has said no team moves would be allowed in 2015.

Missouri Gov. Jay Nixon isn't giving up on the Rams.

"St. Louis is an NFL city," Nixon said Wednesday. "I don't think it's too late to keep the Rams."

But city leaders are hedging their bets, saying the plan now is to work directly with the NFL, not the Rams. The change in philosophy is due in part to the fact that Kroenke won't take calls from Mayor Francis Slay or other city leaders, said Maggie Crane, Slay's spokeswoman.

"He hasn't responded, he hasn't called back, he hasn't done anything," Crane said of Kroenke.

"After a while, you sort of get the hint," said Jeff Rainford, the mayor's chief of staff.

Rainford said St. Louis can make a compelling argument to remain an NFL city: It is the nation's 20th-largest market, with a loyal fan base that sold out every game at the Edward Jones Dome from the team's arrival until a long run of bad play -- the Rams haven't had a winning record since 2003.

If the Rams leave, it isn't clear which team St. Louis might pursue.

The Oakland Raiders and San Diego Chargers also have been reported as teams that could move to Los Angeles.

The Raiders' lease to play at O.co Coliseum, formerly known as the Oakland-Alameda County Coliseum, has expired, and the team is now on a year-to-year agreement. The Chargers can announce their intention to leave San Diego between Feb. 1 and May 1 of each year through 2020 if they pay an early-termination fee tied to the bonds used to expand Qualcomm Stadium in 1997.

St. Louis has been through this before. The Chicago Cardinals moved here in 1960 and stayed until 1987. Unhappy with sharing Busch Stadium with the baseball Cardinals, owner Bill Bidwill moved the team to Arizona.

By the early 1990s, a domed stadium was being built with taxpayer money. St. Louis missed out on an expansion team in 1993 when the league awarded franchises to Jacksonville and Carolina. But in 1995, Rams owner Georgia Frontiere took the Rams back to her hometown. Kroenke bought in as minority owner.

Frontiere died, and in 2010, Kroenke bought the team. Meanwhile, the dome -- small and outdated by NFL standards -- became a point of contention. Negotiations about improvements have gone nowhere.

With the threat of the Rams' departure looming, Nixon in November appointed former Anheuser-Busch executive David Peacock and veteran attorney Robert Blitz to spearhead an effort looking at a new stadium. They are expected to deliver a report to Nixon by Friday. One plan would call for a new stadium near the Mississippi River not far from the Gateway Arch.

Paying for it is the next hurdle.

The dome was built 20 years ago with 30-year bonds. The state of Missouri pays $12 million annually toward the debt; the city and St. Louis County pay $6 million each.

There appears to be no appetite for new public funding. Missouri Senate Majority Leader Ron Richard, a Republican, said it was doubtful that lawmakers would approve new spending for a football team when the state has so many other needs.

Nixon and Rainford said no new taxes or fees would be used for the new stadium, but Nixon has hinted that the bonds for the dome could be extended.

Anheuser-Busch is one of the NFL's largest advertisers, and Peacock worked directly with the league on advertising and marketing while with the brewing giant. He is a member of the Pro Football Hall of Fame advisory board. Blitz was part of the legal team that helped bring the Rams to St. Louis and is legal counsel to the St. Louis Regional Convention and Sports Complex Authority.

ESPN.com's Arash Markazi and The Associated Press contributed to this report.

Rams To Los Angeles?
Rams reporter Nick Wagoner talks about the team's future: Will it be in St. Louis or Los Angeles?