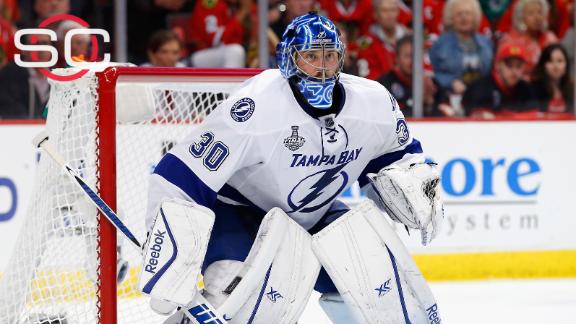 Bishop did not take part in the team's practice Friday morning, but coach Jon Cooper warned the media not to be alarmed about his absence. That was part of the plan when the team made the decision to rule out Bishop for Game 4 on Wednesday night.

The team's medical staff and trainers wanted Bishop to use the extra off day for rest and recovery.

"This was all in the plan," Cooper said. "We'll have a better indication tomorrow morning,"

Asked whether he would feel comfortable giving Bishop the start if he was not 100 percent healthy, as appeared to be the case in Game 3 when Bishop was laboring throughout, Cooper indicated that was a possibility.

"We're going to play the guy that is going to give us the best chance to win, whoever that is," he said. "If Ben Bishop can play a game, he's playing."

Should Bishop not be able to play Saturday against the Chicago Blackhawks, backup Andrei Vasilevskiy will make his second consecutive start. The 20-year-old netminder made his first career NHL playoff start on Wednesday, making 17 of 19 saves in the Lightning's 2-1 loss.

Vasilevskiy said he did not know whether he will start in Game 5 or not, but that he is enjoying the opportunity to contribute during the team's run.

Cooper indicated that if Bishop participates in the team's morning skate on Saturday, that is a good sign he will play.

"I don't know sitting here today if Ben Bishop is playing on Saturday. I hope he plays," Cooper said. "I don't know if he's going to. He's got to get back on the ice. If he's not in the pregame skate tomorrow, that's a pretty good indication of whether he's going to play or not."

Bishop, who delivered a gutsy performance in picking up the win in Game 3, may not be the only Lightning player performing through a significant issue.

Tyler Johnson, who leads the NHL with 13 playoff goals and 23 points, appears to be playing through an issue, though he has denied any injury.

When the centerman was asked why he has not been taking any faceoffs lately -- he has not taken a draw the past three games -- Johnson responded.

"[Ondrej Palat] beat me in practice and he's just better than me, so ..." Johnson said, trailing off.

When pressed again, he said: "I've never been that good at faceoffs so it's all right."