Steelers prep for Landry Jones to start, won't rule Ben Roethlisberger out yet 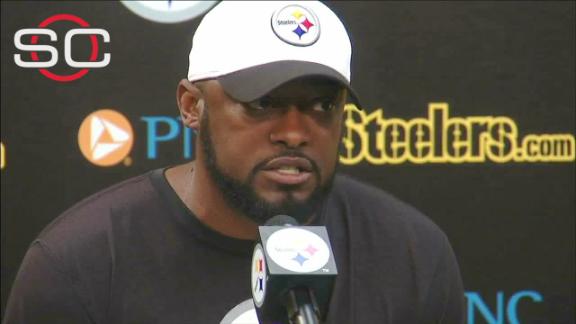 PITTSBURGH -- The Pittsburgh Steelers are preparing for quarterback Landry Jones to make his second career start Sunday against the Cleveland Browns, but will leave the door "slightly ajar" for Ben Roethlisberger, coach Mike Tomlin said.

"It's proven we anticipate playing without [Roethlisberger]," Tomlin said. "We will let him go through his process."

That process includes icing a mid-foot sprain suffered during the fourth quarter of Sunday's 38-35 win over Oakland. The Steelers have a bye next week, potentially giving Roethlisberger two full weeks to get ready to return for the Week 12 matchup at Seattle.

Roethlisberger said on his weekly radio appearance with Pittsburgh 93.7 The Fan that he isn't ruling himself out for the Browns game because he takes injuries week-to-week.

"I can walk on it," Roethlisberger said. "I'm not running around or anything. But the smart thing to do, from what the [doctor] has told me and the trainers, is to kinda keep ice on it and get the swelling out of it and just kind of rest it, let it heal."

In seven quarters of relief, Jones has completed 28 of 47 passes for 456 yards, three touchdowns and two interceptions.

Tomlin took the broad view when asked how he wants to see Jones improve this week.

"I want him to do what's required of us to win," Tomlin said. "When you make it that black-and-white, it makes no bones about what's expected, allows him to have a crystal-clear focus and how he needs to remain in spite of things that may or may not occur."

In other Steelers injury news, running back DeAngelo Williams suffered inflammation in the middle of his foot after a heavy workload Sunday against Oakland.

Williams, who had 27 rushes and two receptions for 225 yards from scrimmage, could miss practice time Wednesday, and the team will monitor his progress during the week. Tomlin was noncommittal on Williams' late-week availability.

With Le'Veon Bell out, the Steelers need Williams' presence on the field.