Steelers will do QB deal after season 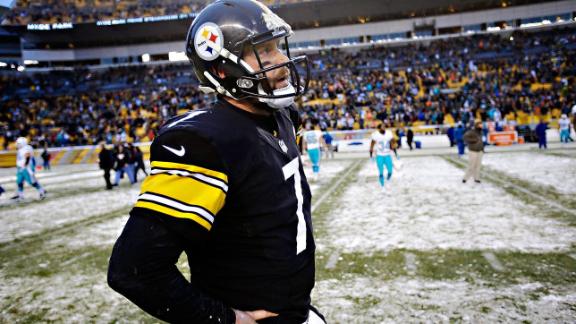 PITTSBURGH -- The Pittsburgh Steelers have informed quarterback Ben Roethlisberger that they will not sign him to a long-term contract until after the 2014 season.

Team president Art Rooney II told Steelers.com he met with Roethlisberger last month and that the Steelers have also talked to Ryan Tollner, Roethlisberger's agent, about their intention of getting a new contract done with their franchise quarterback after this season.

Roethlisberger, who turned 32 in March, has two years left on the eight-year, $102 million contract he signed in 2008.

The Steelers typically sign their starting quarterback to a new contract when there are two years left on the deal. But the Steelers have a handful of players going into the final years of their respective contracts, and they are only a little more than $6.37 million under the salary cap, according to ESPN Stats & Information.

With another significant spike expected in the 2015 salary cap -- the spending ceiling increased by $10 million this season -- Rooney said it simply makes sense to wait until after this season to sign Roethlisberger to a new contract.

"Ben wants to be part of a winning team, to be in a position to compete for championships, and he understands that in order to do that we need to try to keep as many of the other players around as we can," Rooney told Steelers.com. "Addressing the players who are going into the final years of their contract in 2014 makes sense. That's what he and I talked about."

The meeting between Rooney and Roethlisberger took place shortly before the Steelers signed Maurkice Pouncey to a five-year contract extension that makes him one of the highest-paid centers in the NFL.

Pouncey had been in the final year of his rookie contract before signing his new deal in June.

Other Steelers players who are in the final years of their contracts include outside linebacker Jason Worilds, cornerback Cortez Allen and offensive tackle Marcus Gilbert. If the Steelers sign any of those players to a new deal, it will come before the team's Sept. 7 opener against the Browns because team policy is not to engage in contract negotiations once the season starts.

Roethlisberger, one of only three active quarterbacks to win multiple Super Bowls, will make $12.1 million in base salary this season, according to ESPN Stats & Information, and his salary-cap hit is $18.895 million. Rooney has said he wants Roethlisberger, who threw for 4,261 yards and 28 touchdowns last season, to play his entire career with the Steelers. The organization has kept an open dialogue with Roethlisberger and Tollner, Rooney said, so the two know that re-signing Roethlisberger remains a priority.

"We wanted to make sure they were understanding that we do want to make a commitment," Rooney said. "We did assure him that next year is the time frame in which we want to address it."