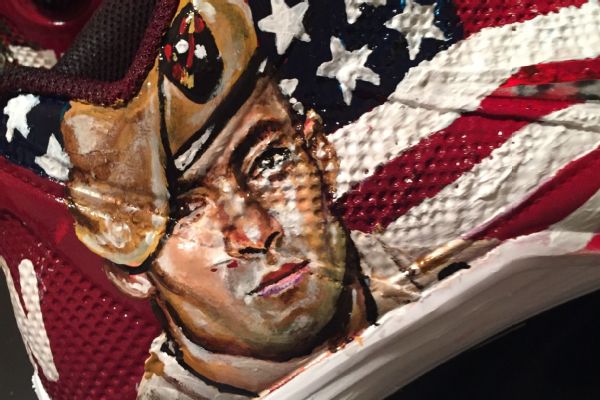 PITTSBURGH -- Antonio Brown is hitting the right tone with his customized footwear over Veterans Day weekend.

Brown will honor former NFL player Pat Tillman with red, white and blue cleats, which he'll wear during pregame workouts before the Pittsburgh Steelers' matchup with the Dallas Cowboysat Heinz Field on Sunday.

Photos of the cleats -- provided by Brown's artist, Corey Pane -- show images of Tillman as an Arizona Cardinals safety and a United States Army Ranger. "TILL" and "MAN" are displayed on the heels, along with the No. 40.

In 2002, Tillman left a fruitful NFL career to serve his country in the war in Afghanistan. He died by friendly fire in 2004.

Brown has worked with Pane, a Connecticut-based artist, all season on various cleat designs.

In 2016, Brown's cleats have displayed tributes to his four children and deceased athletes such as Jose Fernandez, Arnold Palmer and Muhammad Ali.

After an NFL uniform inspector told Brown several times to change his cleats after kickoffs -- only standard-issue game cleats are permitted for in-game use -- Brown has decided to wear his customized cleats for pregame workouts only.