Steph Curry is the ultimate one-off 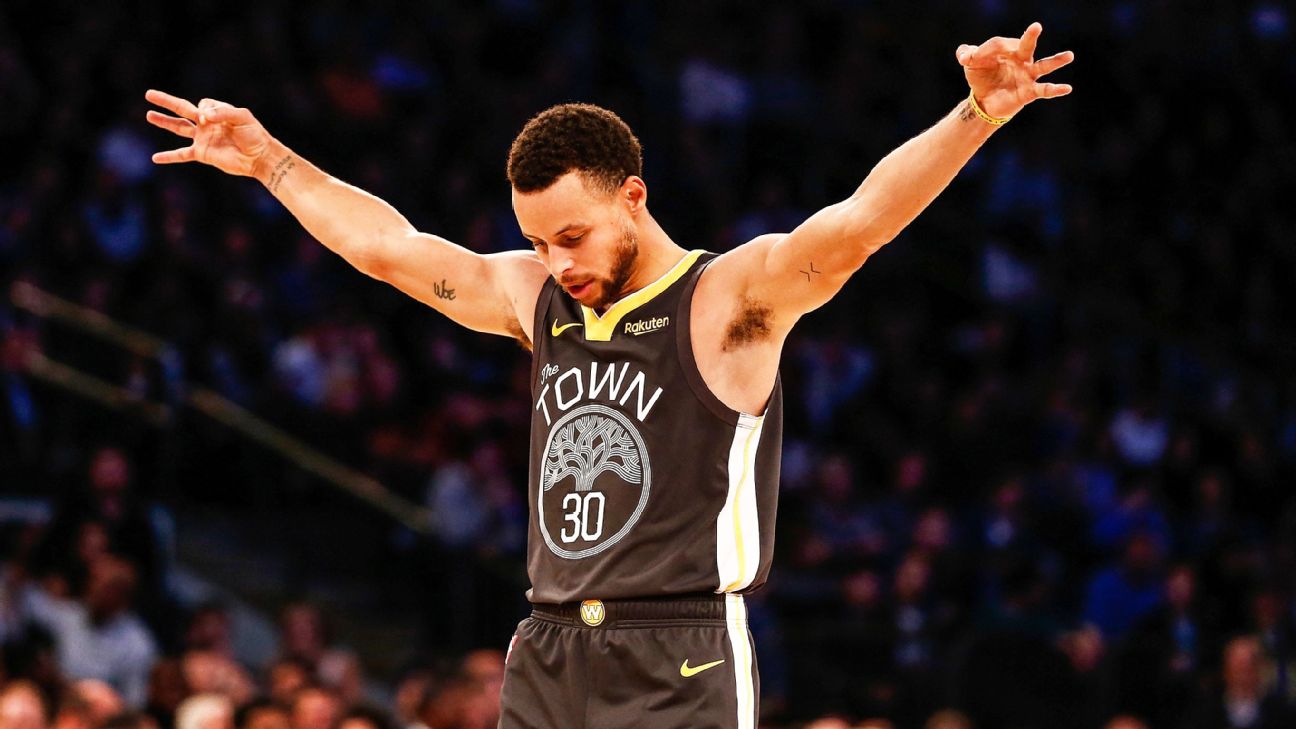 THERE ARE EIGHT players who have won at least three NBA titles and two MVPs. The list reads like the absolute who's who in league history: Kareem. Russell. MJ. Magic. Bird. Duncan. LeBron.

Even tangential fans don't need their full names. You shouldn't for the last one on that list, either: Steph.

At age 30, in his 10th season, Stephen Curry is basking in the prime of his career. If he wins a fourth title or a third MVP -- and both appear possible this season -- the list narrows even further. If he does both ... we're talking about the rarest of the rare.

"I hate to break it to you, but he's already an all-time great," two-time MVP Steve Nash said. "He's the ultimate one-off. He's the evolution of basketball. It evolved before our eyes."

Whenever someone draws boxes around accomplishments -- the arbitrary numbers of titles and MVPs -- narratives can be created. Come up with a different metric, and the list can change.

That's not the intention here. Place aside the trophy case for the moment; the point is that Curry has already arrived. He has been a first-ballot Hall of Famer for a while. He's making a run at Mount Rushmore.

Curry is immensely popular, especially among young fans, but he doesn't enjoy the respect someone of his stature should demand. There have been many examples, but to take one, there was the pushback to him being the first-ever unanimous MVP in 2016.

Gary Payton said it was disrespectful to greats such as Michael Jordan. Tracy McGrady, my esteemed colleague at ESPN, said it was evidence that the league was watered down. LeBron James endorsed Curry's victory that season but then questioned the meaning of the term "valuable." There are plenty more where that came from.

Curry's place in history has two vital pillars, one of which is undeniable and one of which is wrapped in gray. He's generally recognized as the game's greatest shooter, and his brilliance has found a way to change the shape of the floor. Some of the fundamentals of the game have changed with Curry holding the brush.

"He's a walking piece of history. But there's still a certain resistance to him."

Now for the other.

It wasn't just that he went to the Hamptons to offer Kevin Durant a front-row seat on the Warriors' roller-coaster ride into a dynasty. It's that he has more than kept his word, yielding and bending to make room. That act and the ability to continue to excel while doing so are every bit as important to Curry's status as all those 30-footers. In some ways, that's just as historic.

"His willingness to sacrifice for KD is one of the great stories in history," six-time champion Scottie Pippensaid. "If you have a mind for the game, you know that it takes sacrifice to be great. All the greats have to sacrifice something. Otherwise you can't win.

"When the ball hit Jordan's hands, it was to go and score. He won scoring the ball. For me, that meant I didn't get to shoot as much. But I don't think that knocked my greatness back. For Steph, he's given up a seat for KD. But it doesn't make him any less great. He should be looked at as one of the greatest guards the game has ever seen."

"He plays with joy, he trains with joy, but he has intense competitiveness," Nash said. "He's a savant."

He's a lot of things. One of them is an all-time great, and he should be regarded as such. Not when he retires. Now.

THE WIZARDS ARE off to a rough start, and already John Wall and Bradley Beal are calling out teammates. Said Wall: "We've got guys that are worrying about not getting shots and where the ball is going on the offensive end. We shouldn't worry about that." Followed Beal: "I feel like sometimes we have our own agendas on the floor. We complain about shots or complain about playing time, whatever it may be. We're worried about the wrong s---."

There have been quite a few theories put forth as to whom all that referred to. But in talking to Wizards players this week, one theme brought up was the number of guys they have who are facing free agency at the end of the season. There's a load, including Austin Rivers, Markieff Morris, Kelly Oubre, Jeff Green, Tomas Satoransky and Jason Smith. Dwight Howard has a player option, but he hasn't played yet, so he doesn't factor in.

Worrying about stats before free agency is as old as free agency itself. Coaches, general managers and agents can give speeches about how being on a winning team is more valuable than putting up stats on a losing team. But sometimes it can be a hard lesson. This is a dialogue in the Wizards' locker room right now.

Two years ago, the Wizards started 3-9 and ended up winning 49 games. The core of that team is still there. They can recover from this start, but they're fighting a few battles at the moment.

ONE INTERESTING NAMEbeing discussed by executives as a possible future coach in Cleveland is Avery Johnson. For years, owner Dan Gilbert has been interested in reaching into the college ranks to get a big-name coach, and he has made offers to Tom Izzo, Bill Self and John Calipari. Johnson, in his fourth year at Alabama, isn't in that same category but has plenty of NBA experience.

More importantly, he has a strong connection to Cavs rookie Collin Sexton, who played for Johnson last year. Cavs executives spent time with Johnson in advance of drafting Sexton last summer. The team has pinned its future to Sexton, and that makes Johnson all the more intriguing. Johnson was a guest of the team for Sexton's first home game earlier this month.

Warriors assume Curry will drain 3-pointer
Steph Curry moves all over the floor to get open for a corner 3-pointer that he hits, and his Warrior teammates signaled it would go down. 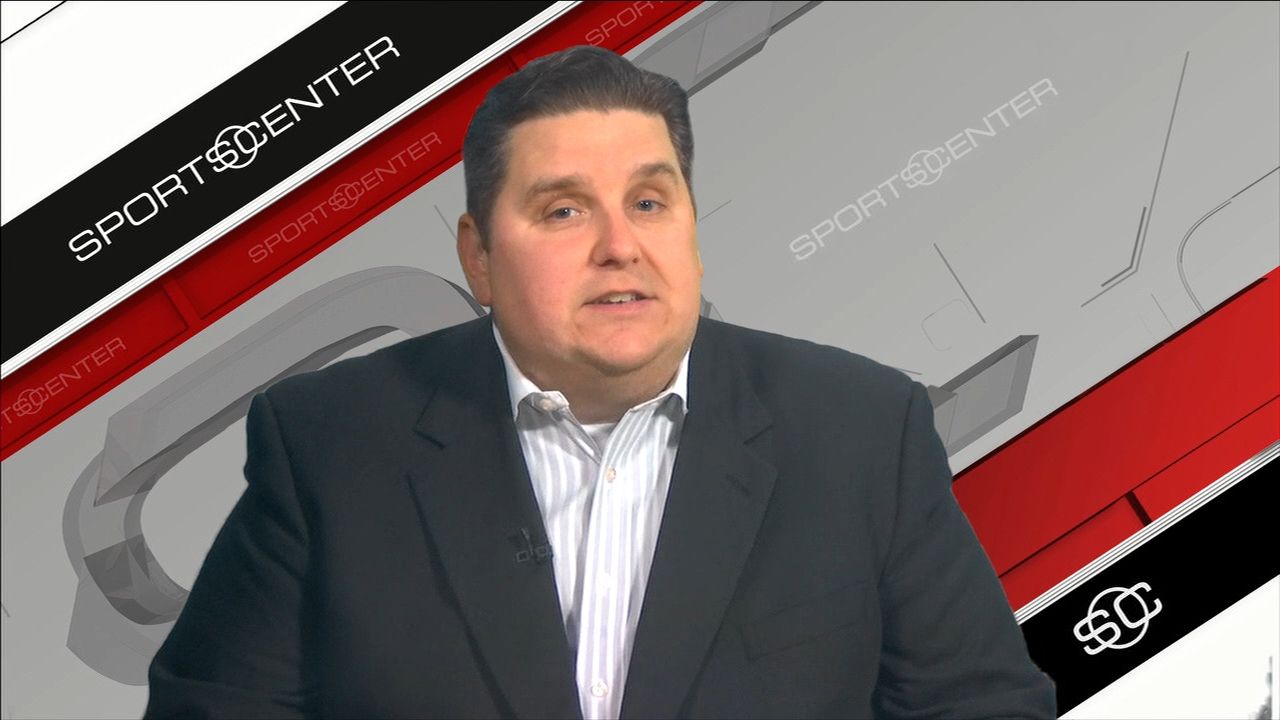