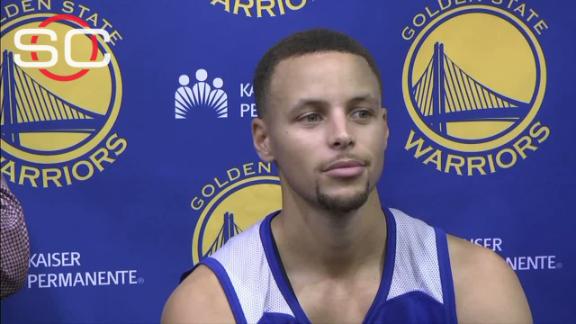 "Yes. Yes," Curry replied to questions about whether he's optimistic about returning to the Warriors.Next offseason will be the two-time reigning NBA MVP's first time as an unrestricted free agent.

Curry re-signing would be in contrast to decisions made by the other two most recent MVPs, Kevin Durant and LeBron James, who both went elsewhere after their rookie extensions expired. Durant decided to join Curry with the Warriors, while James jumped from the Cleveland Cavaliers to the Miami Heat, only to return to Cleveland in 2014 after four seasons in Miami.

Asked whether he'll consult with Durant on contract matters this season, Curry said, "Maybe, but I'm not going to let it distract me at all."

"I want to be back here. I like playing here, and that's it," he said.

Curry will earn more than $12 million this season, less than three of his teammates (Durant, $26.5 million;Klay Thompson, $16.6 million;Draymond Green, $15.3 million). The Warriors intend to make up some of that difference this summer. Depending on where the salary cap falls, Curry's new deal could net him in excess of $30 million per season.

Curry said he hopes his contract status won't be an ongoing storyline this season.

"I hope not because we'll worry about that in the summer. My answer's not going to be any different all year. So, keep asking me, I won't have a different one," he said.

Day one of the Warriors' training camp "was a good day," Curry said, adding it was "business as usual." Warriors coach Steve Kerr called the team's first practice "very smooth."

"One of those things you get excited just looking at the different possibilities, number of lineups we can put out there," Curry said of the talent surrounding him this season.