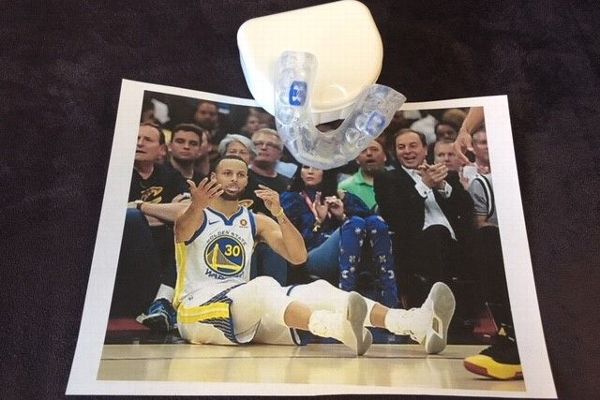 ESPN
By Darren Rovell
Another Stephen Curry game-used mouthguard is going up for sale.

This particular one was used by Curry in Game 4 of the 2018 NBA Finals as the Golden State Warriors completed their sweep of the Cleveland Cavaliers.

It will hit the auction block in California-based firm SCP Auctions' next sale that begins July 26 and concludes Aug. 11.

After the trophy presentation in Cleveland that night, a fan in the crowd was yelling at Curry asking the Warriors star to throw the mouthguard to him.

That fan, who has asked to remain anonymous because he is in law enforcement, got exactly what he wanted.

"Just like his basketball shot, he made a perfect throw to me," said the fan, who traveled from New York to see the game. "I reached up, wrapped it in a napkin and put it in my pocket."

The consignor presented the auction house with a video that a fan behind him had taken of the moment.

The fan had the mouthguard in his house for a couple of days before he realized that there might be some other collector who would get more joy out of it.

He found his way to SCP since the firm auctioned off the only other Curry mouthguard to hit the open market -- a mouthguard that Curry left on the bench during a road game in December 2015. That piece sold for $3,190 in August 2016.

"This is a great, unique piece of memorabilia," said David Kohler, president of SCP Auctions. "It's something that people so identify with Steph, it's something that he closely guards and it's from a significant game."

Kohler said the mouthguard, which has the Under Armour logo and Curry's interlocking SC logo, could be worth at least $25,000.

"It would be perfect for a Warriors fan who is a dentist," Kohler said.

Other pieces of mouth-related memorabilia that have sold in the past include Ty Cobb's dentures, sold in 1999 for $8,000, and a piece of Luis Gonzalez's gum that sold for $10,000 in 2002.
Report a correction or typo
Related topics:
sportsespnstephen currygolden state warriorsmouthguardnbaauction
Copyright © 2020 ESPN Internet Ventures. All rights reserved.
More Videos
From CNN Newsource affiliates
TOP STORIES