Steve Kerr: It's again Finals or bust for Warriors 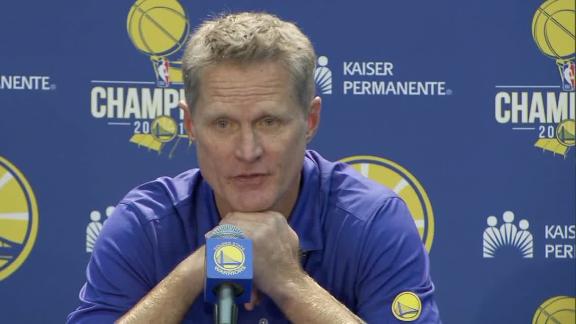 OAKLAND, Calif. -- The Golden State Warriors won an NBA-high 67 games during the 2016-17 regular season and went 16-1 in the postseason to claim their second championship in three years.

That 67-win total was achieved with Kevin Durantplaying in only62 games.

Despite those extraordinary feats, at media day on Friday coach Steve Kerr said he believes the Warriorscan take the dominance to another level this year.

"I think we'll be better this year," Kerr said. "We're deeper. As I talked about, the continuity is really important. But the challenge is obvious. Three years in a row in the Finals, trying to make it a fourth. Very few teams in the history of the league have done that, and there's a reason. It's a long haul, so we're going to have to navigate the season, pace ourselves but not lose our edge, and that's the balance we're looking for."

Golden State bolstered its roster in the offseason by adding an instant offensive weapon in Nick Young, a 3-point specialist in Omri Casspi and an energetic Draymond Green clone in rookie Jordan Bell.

The organization replaced the likes of Ian Clark, James Michael McAdoo and Matt Barnes from last year's squad, but they weren't consistent rotation players. Two of the three new players are expected to see action regularly.

There are 12 returnees on the roster, which Kerr envisions should make everyone's job easier once training camp starts Saturday.

"This year reminds me of two years ago, training camp, with the continuity, almost the exact roster coming back," Kerr said. "Camp will be so much smoother this year than last year because of all the guys we had to incorporate last year and teach our system and our style and our culture. They know it, so we're only adding a couple of players. But having all of our vets, KD and Zaza [Pachulia], David [West], having all those guys comfortable with what we're doing already along with the core group that's been here the last few years, I expect that we'll be able to get right into camp and make progress right away without having to build too much of the foundation."

Durant was diplomatic, electing to not to feed into the "better than last year" narrative.

"We know we're not thinking about being better than last year at all. It's a new season," he said. "It's come in, work hard from day one, man, and see where it takes us."

The 2017 Finals MVP did his best to temper the expectation, but there's no denying the Warriors have a ton of firepower at their disposal. The team believes it has at least 10 players who are quality NBA starters.

With major depth comes figuring out minutes and touches. Kerr will have his hands full with night-to-night decisions, but the two-time MVP Stephen Curry is confident that everyone will adapt accordingly.

"No [worries]. Because of the way we play, everybody touches the ball," he said. "Everybody is involved. Everybody should be a threat when they're on the floor. And with high-IQ guys we have on this team, we just find a way for it to blend and work. Coach Kerr does a great job of preaching that message. We do have our playmakers and guys that can get a bucket when we need to, but throughout the course of the game, the way the shots are created, you have to use every single person that's out there on the floor to make that happen. And guys that can put it on a floor, guys that can pass, guys that can knock down open shots, the more that you have on the floor the better off you are, I think. And we don't have guys that are selfish at all, that are jealous of any other, anybody else's success or going to create drama if they get five shots one game and 15 shots the next game. As long as we win."

Young, who is a jokester and doesn't hide the fact that he loves to have a good time, improved his basketball reputation last season while with the rebuilding Los Angeles Lakers. Upon news of his signing with the Warriors, the pairing was questioned.

"I think his personality fits perfectly," Durant said. "Just being who he is, just a lot of energy, just a lot of excitement around, just playing for us. But on top of that, Nick just always has that energy and excitement with him. It just feels that way every time I see him. So to be able to work with him every day is going to be a joy. And I know his game is going to translate, a guy that can shoot the ball, can score, create for everybody. I'm looking forward to going out there and getting better with him."

Green has always praised general manager Bob Myers for his expertise in constructing strong rosters, and he did so again on Friday.

"I definitely had high praise for Bob," Green said. "That hasn't changed one bit. If anything, it's higher. But, you know, what he did with this team is fantastic, to keep -- I don't know how often somebody brings 12 guys back. I don't think that's usually the case."

For the third consecutive year, the Warriors are the odds-on favorites to win it all. And although the moves Oklahoma City, Minnesota and Houston have made will improve the competition in the Western Conference, it's still not viewed as enough to overthrow the champs.

If the Warriors choose to rest key players for a particular game or if an unfortunate injury occurs, their depth should pay huge dividends.

That's what Kerr is banking on.

"I'm really lucky because I've got a bunch of playmakers, I've got a bunch of versatility to play with, so a lot of the things that we try, it's not that far-fetched," Kerr said. "We can plug a lot of guys into different spots because they plug a lot of holes. So the interesting thing this year will be we've got a lot of mouths to feed. ... We've got a lot of guys who are used to playing big minutes, but our players understand what this is about. There's a bigger picture than just playing time and points per game and stats, and that's why a lot of them have come here the last couple years. I'm going to work with them. I'm confident they're going to work with us, and we'll figure out the right formula." 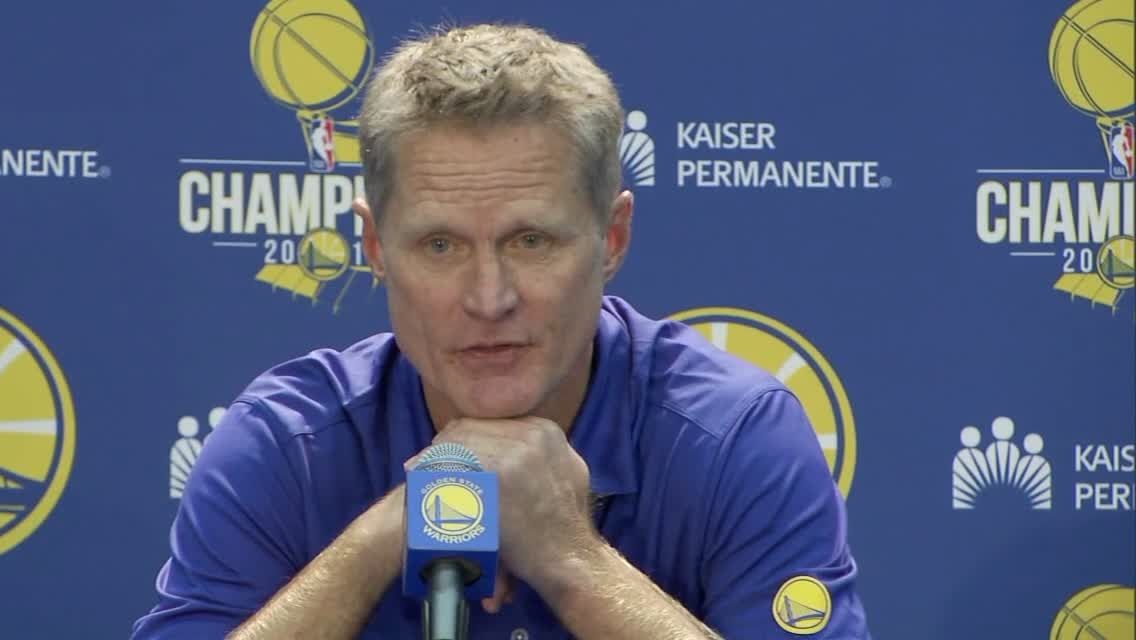