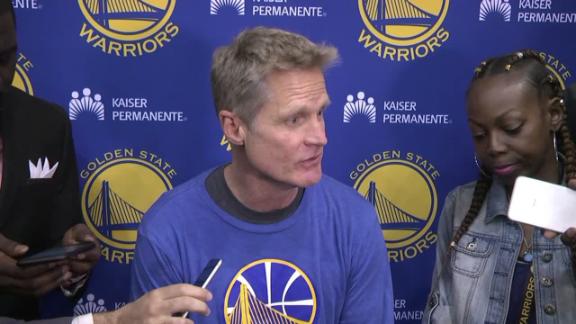 OAKLAND, Calif. --Golden State Warriorscoach Steve Kerr said it's unlikely he returns to roaming the sidelines in time for Game 1 of the NBA Finals against the Cleveland Cavaliers.

However, he didn't completely rule it out.

"As of right now, I will not coach Thursday night," Kerr said after practice Monday. "It's still up in the air."

Kerr addressed the media because acting head coach Mike Brown was under the weather and did not attend practice. ESPN was told that assistant coach Jarron Collins ran much of the session, and that Brown had food poisoning from a bad salad and would be fine going forward. Brown didn't want to get the team sick and stayed home in case his illness was a virus. Brown is expected to be at practice Tuesday, a source told The Undefeated.

"I told the team the good news is the team is really healthy," Kerr joked. "But the bad news is the coaching staff is dropping like flies."

The last time Kerr addressed the media prior to Monday was in between Games 2 and 3 of the opening round of the playoffs. It was then that he announced he was taking an indefinite leave of absence to find a remedy for the migraines and nausea he has experienced stemming from back surgery almost two years ago.

Earlier this month, Kerr visited a specialist at Duke University to undergo a procedure to repair a spinal fluid leak. Since then, he has had his good and bad days. As Kerr sat in his chair addressing the media, he was visibly in some level of discomfort.

"I'm ready, but I'm not ready to coach yet," he said. "I'm still feeling a lot of the effects of what I've got going on."

If he's unable to return for Game 1, Kerr said he expects a final decision on his status to be made shortly after. Either way, he will travel to Cleveland after the Warriors host the first two games of the series.

"I'm not well enough to coach games, and I know that [because] I coached all 82 games and I did OK," Kerr explained. "I was uncomfortable and in a lot of pain, but I did fine. I could make it through. The first two games of the Portland series, whatever happened, things got worse. You saw me in the fourth quarter of Game 2. I could not sit still in my chair. It was that much pain. I would say that I've gotten a little bit better. That's why I'm here talking to you now. But you can probably tell I'm not sitting here happy-go-lucky."

Kerr also raved about how Brown has handled this "awkward situation." Golden State has gone 12-0 this postseason.

"I'm taking part in practices, helping with the messaging, taking part in coaching meetings, but I'm not on the sidelines during games. So he has to make those [in-game] decisions," Kerr said. "It's his team, but he's also taking my advice and counsel from behind the scenes. It's not easy, but he's obviously doing a good job. There seems to be a theme when I'm out. I think the team is like 108-2. So I'm not sure what it is."

Information from ESPN's Ramona Shelburne and Marc Spears was used in this report.