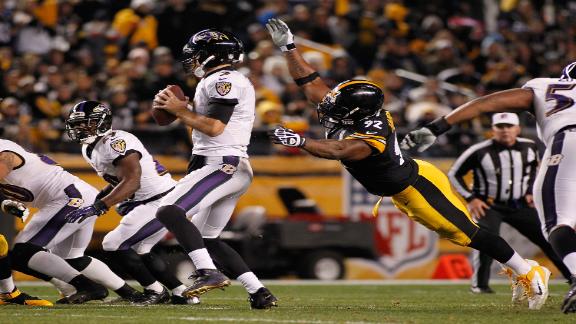 PITTSBURGH --Steelers linebacker James Harrison said the hit from behind that the Baltimore Ravens' Terrell Suggs leveled at LeGarrette Blount on Sunday night made it look like the linebacker was trying to hurt the running back.

In the third quarter, Suggs arrived late and delivered a low hit on Blount. He didn't hit Blount's knees but he was flagged 15 yards for unnecessary roughness.

"That was unnecessary," Harrison said after the Steelerspulled away for a 43-23 victory. "That looks like you're trying to hurt somebody."

"I believe there will be a fine," added Harrison, who has been fined himself more than $100,000 in his career and was suspended for a game in 2011 for repeat violations of a rule that prohibits helmet-to-helmet hits and unnecessary roughness.

Blount said after the game that he has no idea what Suggs was trying to do on the play.

"I don't know what [Suggs] was doing," Blount said, according to the Pittsburgh Post-Gazette. "I don't know what he was thinking. He's known to be a dirty player. As long as he does that, he's going to continue to have people come after him and do whatever we did to get in his head."

"I do think the whole thing goes back to what we talked about last week, the rugby scrum type play. It's a player safety issue. As a defensive player, your responsibility is to get that guy on the ground. That's what he was trying to do."

On Sunday night, Suggs defended his actions after the chippy game in which the Ravens were penalized a season-high 10 times, including three for unnecessary roughness.

The AFC North rivals combined for 17 penalties for 175 yards.