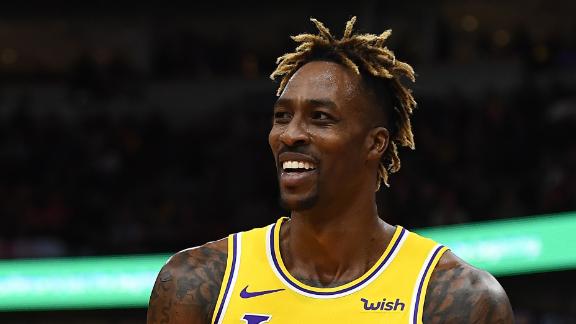 The Lakers host the Golden State Warriors in the second game of back-to-back contests for Los Angeles. The Lakers won for the eighth time in nine games by earning a 123-115 road win over the Phoenix Suns on Tuesday.

An ailing Anthony Davis led the Lakers with 24 points and 12 rebounds. Davis has been playing through a sore right shoulder but also took a shot to the ribs against the Suns.

Multiple reports on Wednesday afternoon said Davis would not play Wednesday night to rest his sore shoulder and ribs.

Kyle Kuzma had his best game of the season off the bench with 23 points on 9-of-16 shooting, including two clutch 3-pointers down the stretch. LeBron James added 19 points, 11 assists and seven boards.

Los Angeles recorded 39 assists, the most for a Lakers team since 2009. Phoenix had 32.

"It was key. We talked about it a lot over the last couple of days after the Toronto loss," James said referring to a Sunday defeat to the Raptors. "(Monday), we talked about how we could not only get good shots but great shots. Tonight, we showed that."

The Lakers will look to blow past the woeful Warriors, who have lost four in a row and seven of their past eight contests. Despite their recent troubles, it isn't all doom and gloom in the Bay Area.

"We understand it's a long season," said rookie forward Eric Paschall, who had eight points and six rebounds Monday in Golden State's 122-108 setback to the Utah Jazz in San Francisco. Paschall is averaging 15.6 points per game. "We play the game of basketball to win. We have a team full of competitors that want to win."

Warriors guard D'Angelo Russell scored 33 points, including 18 in a row in the third, and dished out eight assists against the Jazz. Russell has scored at least 30 points in four straight games, all defeats.

Draymond Green returned after missing five games with an injured index finger. Green, however, was ineffective, finishing with four points, four assists and seven rebounds in 22 minutes before being ejected early in the fourth quarter.

"It's discouraging to be 2-9, but it's a long season and there is no reason why we can't get on a run, win some games and start to feel better about things," said Warriors coach Steve Kerr, referring to the team's record.

Lakers guard Rajon Rondo, who missed the opening nine games due to a strained right calf, made his season debut against the Suns. Rondo had five points, seven assists and six rebounds in 14 minutes. Rondo is not expected to play Wednesday in the second of back-to-back games.