Tanking games not on Melo's mind 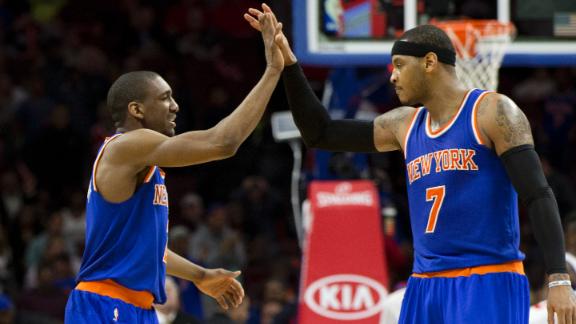 PHILADELPHIA -- Some New York Knicks fans want to see the team tank the season to land a top pick in the NBA draft.

But to star forward Carmelo Anthony, that is a "bad mentality to have."

"I don't know how to have that mindset," Anthony said Wednesday night after the Knicks beat the Philadelphia 76ers98-91 to improve to 7-36. "Having that mindset as a basketball player, as a competitor, it's just hard to do unless you don't care about the game, what happens and your performance. To say that we're going to go out there and we want to lose a basketball game, I think that's a bad mentality to have."

The Knicks have won two straight for the first time since Nov. 2 but still have the NBA's worst record.

New York is percentage points behind the Sixers (8-34) and the Minnesota Timberwolves (7-34).

Knicks president Phil Jackson essentially pulled the plug on the season when he traded J.R. Smith and Iman Shumpert for a 2019 second-round pick and two trade exceptions earlier this month. So the focus for the Knicks has turned to free agency and the upcoming draft.

One other storyline for New York is the health of Anthony's left knee.

Anthony has played in two straight games since sitting out six straight due to knee soreness. On Wednesday, he scored a game-high 27 points and pulled down 11 rebounds to lead New York.

"I think the most important thing is just a matter of how much work I've been able to put in with my overall body these two weeks," Anthony said before the game. "So that's kind of what's getting me through right now, not having to compensate my knee, and everything else is feeling good."

Surgery is still a distinct possibility for Anthony. The 30-year-old said earlier this month that surgery is "going to be his only option" at some point.

It is unclear at this point when Anthony will have surgery. Jackson has said that playing in the All-Star Game, which will be held at Madison Square Garden on Feb. 15, is important to Anthony.

Melo Not Interested In Tanking
ESPN New York reporter Ian Begley breaks down the Knicks' win over the 76ers and Carmelo Anthony's thoughts on tanking.