TE Eric Ebron walking at practice but not taking part 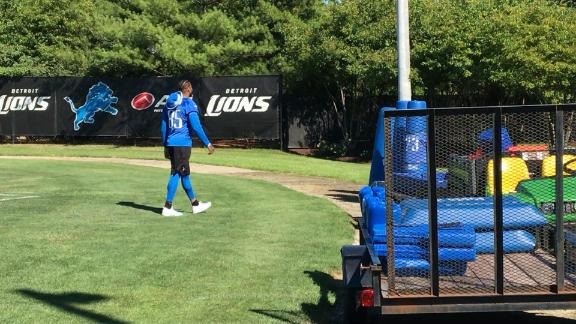 ALLEN PARK, Mich. -- Detroit Lions tight end Eric Ebron was at practice Monday but did not participate after injuring his right ankle Saturday during the team's mock game.

Ebron, though, was walking on his own and did not appear to have a significant limp. It was initially reported Ebron had an Achilles injury that the NFL Network initially said "could be devastating."

Ebron came out during individual drills wearing his typical bucket hat and sneakers and had a long conversation with head coach Jim Caldwell between Detroit's two practice fields. He then went to the tight end group and spent time explaining things to undrafted rookie Cole Wick, who will likely see more time as long as Ebron is out.

Ebron was not wearing a boot on his right foot. He walked slowly off the field after practice, ignoring questions from reporters.

Ebron had been carted off the field during Saturday's mock game. With Ebron out, Wick and Matthew Mulligan took reps with the first team at tight end.