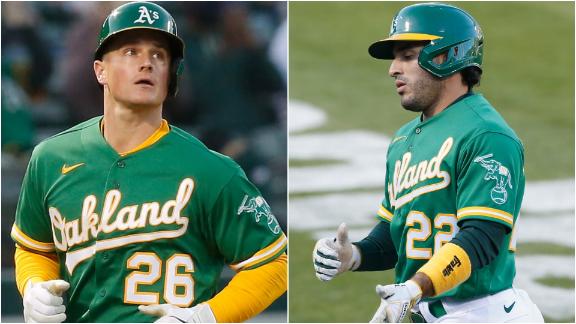 
After George Springer went on the injured list earlier in the day, Toronto lost right-handed reliever David Phelps to shoulder discomfort and infielder Joe Panik, who hurt a calf muscle running out a grounder. Both were scheduled for further examination Thursday, with manager Charlie Montoyo expecting to be short-handed for the afternoon series finale.

Hernández also had an earlier run-scoring single before coming through against Lou Trivino (1-1), who was tagged for five earned runs after allowing a total of three in his first 15 appearances this year.

"Everyone has a bad night. Tomorrow I fully trust Lou and Diek (Jake Diekman) and the back end of our bullpen," said starter Chris Bassitt, who settled for a no-decision.

The A's (19-13) are still tied for the best winning percentage in the majors after beginning the season 0-6.

Laureano went deep in the first after Bassitt fell behind 2-0 in the top half - but the right-hander bounced back to pitch a solid outing.

"The guy's a first-class starter, he's everything you want in a starter. To give up two runs in the beginning of the game and then to dominate like he did it was fun to watch. It's a little disappointing I couldn't bring home the W."

Hernández and Randal Grichuk hit RBI singles in the first inning before Laureano connected for the fourth time in five games. He had a single and double in his following two at-bats, collecting three of the six hits allowed by Robbie Ray in six innings.


Grichuk added another run-scoring single in the decisive eighth.

"Good job by the offense to come back against good pitching," Montoyo said.

Bassitt struck out seven over seven innings. He allowed two runs for the fifth straight start.

Ray, who was looking to win back-to-back starts for the first time in 2021, struck out nine and walked none. Jordan Romano (3-1) followed with a perfect seventh for the win.

"Fastball command," Ray said of what's working for him. "That's been the biggest thing for me is being able to move that fastball around and place it where I want to."

Matt Olson played his 421st game at first base for the A's, passing Scott Hatteberg for fourth place in Oakland history.


Oakland faced a left-handed starter for the fourth straight game, sixth in seven and ninth in the last 12 overall.

And the A's will see another southpaw, Hyun Jin Ryu, in Thursday's series finale.

Blue Jays: OF Springer went on the 10-day injured list with a strained right quadriceps muscle. He had an MRI exam on his troublesome leg earlier, a change of plans from a day earlier but the decision came after consultation with Springer and the medical staff. The injury forced Springer out Sunday. "The main reason we did it, we just didn't see him improving fast enough so we decided to get some imaging done to determine the next steps," Montoyo said. OF Jonathan Davis was recalled to replace Springer.

Athletics: C Austin Allen, called up Tuesday to replace C Aramís García since he has a stomach bug, gave regular Sean Murphy a much-needed break from behind the plate so he could be designated hitter. Allen arrived too late for Tuesday's game because of a delayed flight. ... OF Chad Pinder (sprained left knee) continues all his on-field baseball work and is nearing a rehab assignment, perhaps by this weekend. "He's doing everything. Probably goes out on rehab toward the end of our homestand," manager Bob Melvin said.

Ryu (1-0, 2.60 ERA) is set to return from a strained right glute muscle to pitch Thursday. "There's no more hurdles. He's good to go for tomorrow," Montoyo said. Oakland sends RHP Mike Fiers (0-1, 4.50) to the mound for his second start of the season needing seven strikeouts for 1,000 in his career.