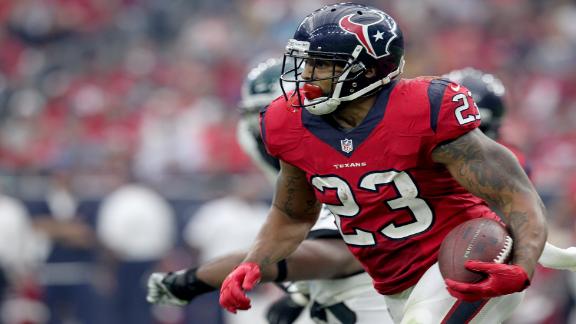 Foster suffered a groin injury on a pass play Monday night during the Texans' first fully padded training camp practice. He likely will miss the start of the regular season andcould be placed on short-term injured reserve, which would allow the Texans to bring him back to practices after Week 6 and into a game after Week 8.

"He's going to miss some time, there's no doubt about that," Texans coach Bill O'Brien said. "We have no idea how much time he's going to miss. There's medical opinions that still need to take place. One thing I want to say about Arian is, you know, I feel bad for him personally. I think he came into this offseason and he really worked extremely hard, came back here and ran the conditioning test really, really well, came back in great shape, and he was practicing well. But, as a football team, it's next man up, next man up."

In Philadelphia, Foster will see Dr. William Meyers, a specialist who operated onJadeveon Clowneylast year when Clowney had sports hernia surgery in June.

Foster ranked sixth in the NFL last season with 1,246 rushing yards even though injuries caused him to miss three games entirely and parts of three others.

The Texans had running backs Pierre Thomas, Joe McKnight and Ben Malena in to work out Wednesday to try to help fill the void of Foster's absence.

Thomas' agent, Lamont Smith, tweeted Wednesday that his client and the Texans couldn't agree to a deal.

"We want someone that can do a little bit of everything," O'Brien said. "I know that sounds like a noncommittal type of answer, but it's the truth. We want a guy that can run the football in certain situations, a guy that can catch the ball in the backfield, a guy that can help us on special teams. I'm sure we'll find some candidates to be able to do that."

Second-year back Alfred Blue is expected to take over first-team duties in Foster's absence. Blue was drafted in the sixth round last season.

Jonathan Grimes, entering his fourth season in the NFL, and fullback Jay Prosch also return from last season. The Texans also added Chris Polk in free agency and drafted Kenny Hilliard out of LSU in the seventh round this year.

Information from ESPN.com's Tania Ganguli was used in this report.