Texans' Tom Savage to start in place of Brock Osweiler 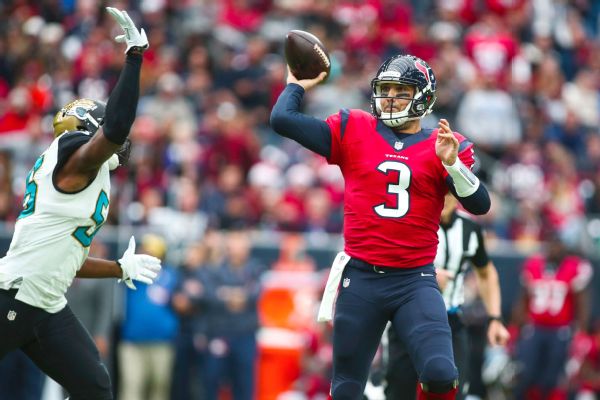 O'Brien benched starting quarterback Brock Osweiler midway through the second quarter on Sunday, with Houston trailing the Jacksonville Jaguars 13-0. Savage led the Texans to a comeback 21-20 victory in relief of Osweiler.

O'Brien said he thinks Savage gives the Texans the best chance to beat the Bengals.

The Texans gave Osweiler a four-year, $72 million contract in March, though just two years and $37 million of it is guaranteed. Savage, who is in the third year of his rookie contract he signed after being drafted by the Texans in 2014, is guaranteed just $300,584 for the remainder of his deal.

Savage finished 23-of-36 passing for 260 yards after entering in the second quarter on Sunday. Before he was benched, Osweiler was 6-of-11 for 48 yards and two interceptions. Neither quarterback threw a touchdown pass.

O'Brien said he chose to name a starter early in the week because he wanted to give Savage the full week to prepare during what is already a short week.

"I think it's important for Tom to have the week as a starter, to experience the whole thing and to make sure he understands what the game plan is," O'Brien said. "It's a short week, so he knows he's got to put a lot of extra prep time into this thing, and I know he will."

Prior to Sunday, Savage had not played in a regular-season NFL game in more than two years. He spent last season on injured reserve after spraining his shoulder during a preseason game. During training camp, O'Brien praised Savage's knowledge of the offense.

"He's the same guy every day," O'Brien said. "He's a very consistent person. He's been the same guy as far as his personality and how he approaches his day-to-day workload since he arrived here. He's a hardworking guy. He's done a lot to work in the weight room to change his body. He's worked to get in better shape over the years.

"He's always trying to do something to prepare, and I think as far as leadership in the huddle, he communicates the play well. He can throw the football, and that more than anything can spark a team ... when you complete some passes."

The Texans are in a playoff race, tied with the Tennessee Titans atop the AFC South at 8-6. Houston holds the tiebreaker since the Texans are 5-0 in the division. The Texans and Titans play Week 17 in Tennessee.