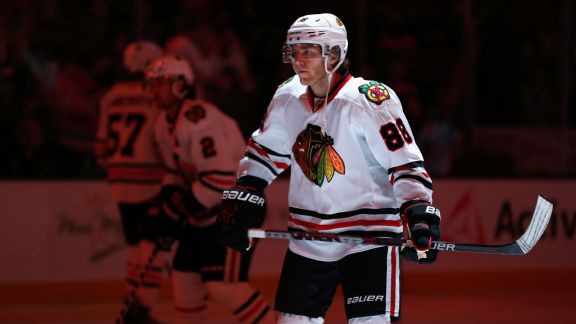 Now that the Stanley Cup playoffs have been whittled down to the final four teams, a select few players are only four wins shy of the Stanley Cup finals. The conference finals stage has often been the setting for some of hockey's most indelible moments -- and if recent history is any indication, it's also where some of hockey's biggest stars cement their legacies.

"That emotion is what is so fun about that next step. You're four wins away from playing for the Cup," said TV analyst Craig Simpson, a former NHL player and coach who won the Stanley Cup twice as a member of the Edmonton Oilers. "That creates great moments and guys who are able to play under that pressure and seize those moments in those big games. That's what great players strive for. That's what makes it fun."

Here are the five greatest conference finals performances of the past five years.

Though the Sharks ultimately fell short in the Stanley Cup finals against the Pittsburgh Penguinslast spring, they wouldn't even have advanced that far if not for a big performance by their captain. Pavelski propelled his team past the St. Louis Bluesin the Western Conference finals last year. With four goals and five assists in the six-game series, the center registered a point in every game while scoring one winning goal and setting up another.

He also led by example after San Jose dropped the series opener, responding with an assist and a team-leading seven hits in Game 2. He saved his scoring prowess for when the Sharks needed it most, combining for three goals in Games 5 and 6 to help San Jose advance.

With Chicago trailing 3-2 in the Western Conference finals and on the verge of elimination against the Anaheim Ducks, Kane pulled his team back from the brink. After being held off the scoresheet in Anaheim's 5-4 overtime win in Game 5, the Blackhawks' star essentially took over the series.

Following a scoreless opening period in Game 6, Kane came out flying in the second. He set upBrandon Saad's goal to break the scoreless deadlock before scoring the eventual winner on a remarkable individual play less than four minutes later to even the series. In the winner-take-all Game 7, Kane dished out three assists to push Chicago through to the Stanley Cup finals.

Tampa Bay LightningcenterTyler Johnson deserves recognition as well that year for his four-goal, nine-point effort in his team's seven-game series win against the New York Rangers.

In a battle between the previous two Cup winners, Jeff Carter dominated against the Blackhawks. After setting up the Kings' lone goal in a 3-1 loss in Game 1, Carter went on an absolute tear, scoring a hat trick and adding an assist in Game 2.

Trailing 3-1 in the second period of Game 3, Carter cued the comeback with another goal, followed by an assist onTyler Toffoli's equalizer. Then, with the Kings trailing 2-0 early in Game 7, Carter did it again, scoring his fifth goal of the series -- to go with six assists -- and sparking the comeback that would lead toAlec Martinez's overtime winner and an eventual second Stanley Cup in three years for the Kings.

The Bruins crushed the talented Penguins on their way to Boston's second Cup finals appearance in three seasons. Featuring talent and grit across their lineup, Boston swept Pittsburgh in a dominant performance keyed by its goaltender.

Rask set the tone immediately, posting a 29-save shutout on the road in Game 1 as Boston took over the series. With the Penguins trailing the series 3-0 and at their most desperate in Game 4, Rask shut them out again in the series-deciding 1-0 win. Rask -- who posted a phenomenal .985 save percentage for the series -- emerged as an elite goalie after backing up Conn Smythe winner Tim Thomas during the Bruins' 2011 title run.

After qualifying as a wild card and earning the No. 8 seed in the Western Conference, Los Angeles came out of nowhere to become an absolute wrecking crew in the postseason. The upstart Kings went 16-4 in the playoffs on their way to the franchise's first Stanley Cup, and that dominant run was charged in large part by Kopitar.