The more you know about Kevin Durant, the more you can see how his star ascended 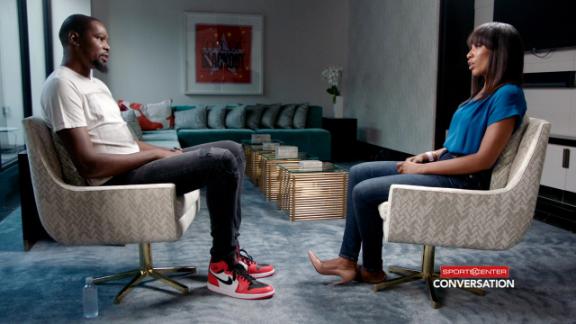 So much of the conversation in professional sports centers around the business as it does the game. How do you build your #brand? How do you expand your reach? How do you hit global superstar status?

For Kevin Durant, his path was simple: He just did himself. "IM ME, I DO ME, AND I CHILL" -- it has been his Twitter bio since the day he signed up, and Durant has stuck to it. He came into the NBA as an 18-year-old ready to prove the world wrong about doubts over his strength and worked his way to the pinnacle with a league MVP with the Oklahoma City Thunder in 2014 and a championship in his first season with the Golden State Warriors in 2017.

But along the way, Durant's star ascended -- not from a well-mapped PR plan, but from organic moments of him just being himself. Like showing up to play flag football with college kids during the lockout. Like answering questions at the podium after playoff games with a backpack on. Like his emotional MVP speech.

Durant isn't some complicated enigma who is hard to parse. He's a kid from Seat Pleasant, Maryland, just outside Washington D.C., who loves to hoop. He's certainly evolved since he was drafted in 2007 and has growing passions and ambitions, but Durant has always been a straightforward player and a genuine person.

With the 2017 Finals MVP taking his star power to India this week to promote his sport, here are some lesser-known facts that provide insight into what makes Durant tick.

It's always been a bit of a weird inside joke with him to avoid saying his real height, but he finally came clean last year. "Since I love you guys so much, I was recorded at 6-10 and three-quarters with no shoes, so with my shoes on I'm 7 feet," Durant told KNBR last December. "I just like messing with people. They just ask me so much ... yeah, I just like messing with people."

Photography is a major hobby of his.

He even snapped photos for The Players' Tribune at Super Bowl 50 in San Francisco.

He wears No. 35 for Charles Craig, a mentor and Durant's first basketball coach.

Craig -- whom Durant calls "Big Chucky" -- was murdered at the age of 35. Durant started wearing No. 35 at the University of Texas.

That shimmy before every free throw loosens him up.

Durant started doing it his rookie season in Seattle, mainly because he was nervous. He missed some free throws and was getting tight, so he told himself he needed to loosen up. He pulled the shimmy and started swishing them again. And it's stuck. Probably because he's an 88 percent career free throw shooter.

He has a lot of tattoos.

You just don't always see them. They were once labeled "business tattoos," as Durant avoided getting visible tattoos on his arms or neck, instead covering his stomach, back and now legs. He has huge tattoos of Rick James and Tupac on his legs, he has "Maryland" across his back, he's got the Washington Nationals logo, he has a small triangle on his wrist (for him, his manager/friend Charlie Bell and business partner Rich Kleiman) and he has a Bible verse on his back.

And originally it had a typo in it. It said "mautre" instead of "mature." It's fixed now.

He's ditched the habit a bit since joining half-court-heave savant Stephen Curry, but Durant routinely will hold on to the ball and release it just a split second after the buzzer on long-distance, end-of-quarter shots. He's admitted to it back in 2013: "It depends on what I'm shooting from the field. First quarter, if I'm 4-for-4, I let it go. Third quarter, if I'm like 10-for-16 or 10-for-17, I might let it go. But if I'm like 8-for-19, I'm going to go ahead and dribble one more second and let that buzzer go off and then throw it up there. So it depends on how the game's going."

His MVP speech was mostly ad-libbed.

He had a plan, written basically on the back of a napkin. It consisted of getting his teammates onstage and talking about them. From there, though, he just sort of winged it. What resulted was an incredibly raw, emotional moment that resonated with people even outside of sports.

He went to three high schools.

Durant started at National Christian Academy in Fort Washington, Maryland, then spent a year at the famed Oak Hill Academy in Mouth of Wilson, Virginia, but concluded his high schooling at Montrose Christian School in Rockville, Maryland. The takeaway: Durant wasn't afraid to switch teams, even as a teenager.

He claims to be an expert at "NBA 2K" and "FIFA" and honed his skills back in his early days in Oklahoma City, actually playing against neighborhood kids.

He likes to make music.

There's the mysterious track with LeBron James out there somewhere, but Durant has recorded a number of songs, including one called "Worried About Tomorrow" with rapper Privaledge.

He can bench-press 185 pounds now.

At the draft combine back in 2007, it was a really big deal that he couldn't. He can do it now, and then some.

He loves the Washington Redskins.

He routinely argues with friends and teammates about his favorite football team and supports the franchise through the bad ... and the bad. He has -- or at least, had -- a pair of Redskins socks he'd wear often after games, so much that they had holes in them.

He's a bit of a penny-pincher.

He doesn't buy a lot of new clothes. He doesn't have a ton of cars. And even back in 2010, he went on Twitter and asked for someone to let him use their ESPN Insider login information.

Early in his career with the Thunder, staffers literally had to kick Durant out of the practice facility and lock the door behind him so he'd go home and get some rest. He has pulled off some of that obsessive behavior in recent years, expanding his horizons with other hobbies, but at his core, Durant can't get enough of the roundball.

He has a bulldog named Zo.

The pup was introduced to the world via Facebook in 2014.

When Durant was in the Hamptons last summer, he went on a bike ride to clear his head and gather his thoughts the morning before he announced his free-agency decision.

He used to drive a van.

It was decked out and customized with lots of bells and whistles (such as Texas Longhorn hubcaps), but it was just a black GMC van.

He pays attention to the media.

Durant can't resist watching First Take. He loves to read articles and follow rumors and news. He's not just obsessed with playing basketball; he's obsessed with the NBA in general.

He pays attention to social media.

Durant has been known to mix it up every now and then with fans and friends on Twitter., but he has admitted one of his biggest flaws is blocking out some of the noise. He claims to not let it bother him, but Durant couldn't keep away from peeking at critical comments on his Instagram so much that he deleted his accounts last year -- both of them, private and public.

There has been a bit of an obsession at coming up with a suitable nickname for Durant for a number of years. The Slim Reaper? Durantula? He doesn't care for those. He once said he liked "The Servant" but was really mostly joking. When it comes down to nicknames, Durant's preference is pretty simple: "I just like KD."

He was teammates with Michael Beasley, Ty Lawson and Greivis Vasquez in high school.

He grew up wanting to be a weatherman.

An interest in meteorology was certainly a fit in Tornado Alley. The fascination has always stuck with Durant, though, and his apparel line has included "weatherman" design schemes of his shoe, based on Doppler radar imagery, and other gear that says "Trust the Weatherman" (which was also the handle of his defunct private Instagram).

He says his all-time favorite movie is "Twister."

He wants to be a music producer when he retires.

Or at least that's what he said a few years ago. As things go with Durant, his interests change often, and sometimes quickly.

He says he can't palm a basketball.

KD 'can't stand' his detractors
Kevin Durant sits down with Cari Champion to talk about the work he put in in Golden State, how he handled the naysayers, how the business of the NBA got to him and how his move changed the league for the better.
Report a correction or typo
Related topics:
sportsespnoklahoma city thundervangolden state warriorsinside informationmvpbulldogbioindianbafactsnuggetsfactoidswashington redskinsmusiczoquick hitstattooskevin durantkdinformationdetailshigh schoolvideo gamespet
Copyright © 2021 ESPN Internet Ventures. All rights reserved.
More Videos
From CNN Newsource affiliates
TOP STORIES