The most important draft pick by every expansion team since 1991 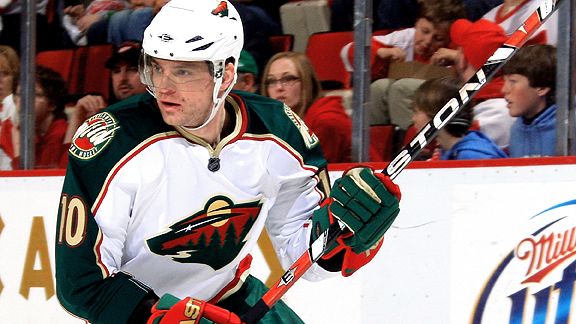 ESPN
By Andrew Knoll
On June 21, the NHL will announce the results of its first expansion draft since 2000. The Vegas Golden Knights, the league's 31st franchise, will reveal their 30 selections -- one pick from each of the current teams -- during the NHL Awards in Las Vegas, which start at 8 p.m. ET.

This marks a foray into a new market and the league's first expansion draft in 17 years, the longest time without growth since it began adding new franchises in 1967. After the NHL merged with the WHA -- and added theEdmonton Oilers, New England/Hartford Whalers, Quebec Nordiques and Winnipeg Jetsfor the 1979-80 season -- the league had 21 teams until 1991.

We looked back at the last period of expansion, from 1991 to 2000 -- a span in which the NHL added nine teams over the course of six expansion drafts -- and noted the most important pick by every new team during that stretch.

Impact players: The franchise's first star was its first entry-draft selection,Pat Falloon, who had 59 points during the Sharks' inaugural campaign. In the expansion draft, San Jose selected an undersized but athletic goalie, fan favorite Arturs Irbe--also known as the Little Latvian -- who had been drafted 196th overall by the Minnesota North Stars in the 1989 entry draft. Doug Wilson, although well removed from his Norris Trophy-winning form with theChicago Blackhawks,was another significant expansion-draft addition for the Sharks. He would become the franchise's general manager in 2003, a position he still holds.

Impact players: The Senators were absolutely terrible for their first four years, averaging fewer than 13 wins each season. Their first entry-draft pick,Alexei Yashin,remained in Russia to play and did not join Ottawa until 1993, and franchise icon Daniel Alfredsson, drafted 133rd overall, in the sixth round, in 1994, did not arrive until Year 4. The expansion draft yielded Ottawa's first top scorer, former NCAA standout defenseman Norm Maciver, and steady veteran left winger Sylvain Turgeon, the No. 2 overall pick in 1983 for the Hartford Whalers.

Impact player: Brian Bradley was taken 36th overall in the expansion draft, but the center was by far the most successful player to come out of the draft for either the Lightning or the Senators. At 27, he was in his prime when he joined the Bolts, and Bradley led the Lightning with a career-high 42 goals and 86 points in Tampa Bay's inaugural season. He would go on to make his All-Star debut with the Bolts and score the team's first preseason goal. Though he was forced to retire because of chronic injuries at age 33, Bradley was the Lightning's first star and remains a popular figure in franchise lore, alongside championship pillarsMartin St. Louis, Brad Richards and Vincent Lecavalier.

Impact players: Goaltender John Vanbiesbrouck was a no-brainer as the first pick in the expansion draft, and he figured centrally in a run that propelled the Panthers into the Stanley Cup Final within three seasons of entering the league. Florida would get a steal inScott Mellanbyat No. 30. Mellanby, a rugged forward, would set career highs for points in '94 and again in '96, with 60 and 70, respectively. He also racked up 100-plus penalty minutes during both seasons. Mellanby started the "Rat Trick" tradition of fans throwing toy rats on the ice after he killed a real rat by firing it across the Panthers' dressing room with his stick.

The Mighty Ducks of Anaheim (now the Anaheim Ducks)

Impact players: The Mighty Ducks also drafted a goaltender first, Guy Hebert, who would win 173 games for them, the second most in franchise history. The first true franchise superstar was the Ducks' first entry-draft selection, Paul Kariya, who would arrive in time for Anaheim's second season. The winger would score 300 goals with the Ducks, including a 50-goal season in 1995-96, and help lead them to the 2003 finals. There, he scored one of the most dramatic goals in finals history mere moments after being knocked unconscious by New Jersey's Scott Stevens.

FirstStanley Cup Finalberth: 2017 (lost to the Penguins in six games)

Impact player: The Predators would wheel and deal considerably at the expansion draft, leaving them with few significant pieces from the draft itself. Much like Vegas GM George McPhee might do, Nashville's David Poile actively made deals before the draft in exchange for not selecting players and dealt players afterward as well. Poile selectedTomas Vokoun, a future No. 1 goalie on the Preds' first playoff teams, and passed on Garry Galley in exchange for the rights to Kimmo Timonen, who became an All-Star and team captain in Nashville.

Atlanta Thrashers (relocated to Winnipeg in 2011)

Impact player: Ray Ferraro had developed a reputation as clutch scorer and a physical presence with the Whalers andNew York Islanders,earning him the nickname Big Ball of Hate. The center was also more affectionately called Chicken Parm, and he was more than just a recognizable face in the early years in Atlanta. The Thrashers' captain scored 76 points in the franchise's second season, his best campaign since a 40/40 season in '91-92. In 2001, Ferraro would be traded to theSt. Louis Bluesnot long after the arrival of cornerstones Ilya Kovalchuk and Dany Heatley.

Impact player: Geoff Sanderson was the 23rd pick in the expansion draft, and he was one of the few bright spots in the early days of expansion into Buckeye territory. A 46-goal scorer with Hartford, Sanderson languished with theBuffalo Sabresbefore resurrecting his career with Columbus. He scored the first hat trick in franchise history and had two 30-goal seasons for the Jackets. The franchise's first major star would arrive two years later in the form of a No. 1 overall entry-draft selection, winger Rick Nash.

Impact players: Defenseman Filip Kuba was the 15th overall selection in the expansion draft. He would go on to help the Wild to the conference finals in 2003 and represent them in the 2004 All-Star Game, which they hosted in St. Paul. In 2000, Minnesota also drafted Marian Gaborik third overall in the entry draft. The Slovak winger would provide a game-breaking combination of top-percentile acceleration and a lethal wrist shot. He remains the Wild's franchise leader in goals, power-play goals, points per game and game-winning goals, among other categories.
Report a correction or typo
Related topics:
sportsespnvegasmighty ducks of anaheimottawa senatorscolumbus blue jacketssan jose sharksflorida panthersatlanta thrashersminnesota wildvegas golden knightsnhlmight ducksmarian gaborikdraftgeorge mcpheetampa bay lightningnashville predatorspaul kariyaexpansion draftwinnipeg jetsanaheim ducks
Copyright © 2020 ESPN Internet Ventures. All rights reserved.
More Videos
From CNN Newsource affiliates
TOP STORIES