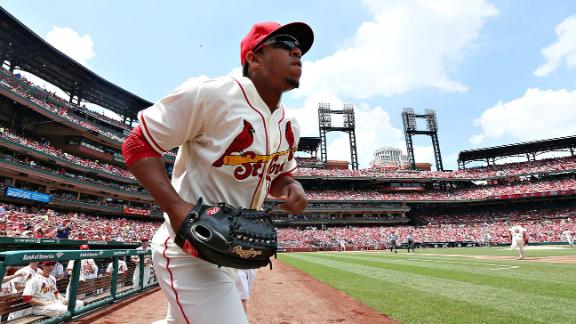 SOSUA, Dominican Republic -- Several St. Louis Cardinals were among thousands of people who crowded into a cemetery near the Dominican Republic's north coast for Tuesday's burial of major league outfielder Oscar Taveras.

Some people clutched pictures of Taveras as they walked behind his coffin and entered the municipal cemetery in the town of Sosua. The crowd had started at a nearby church for a brief ceremony ahead of the burial for the 22-year-old slugger, who died Sunday following a car crash.

"He was my brother, he was my friend, we were always together anytime we went out," Martinez said.

The Giants and Royals observed a moment of silence in Taveras' honor before Game 6 of the World Series in Kansas City, Missouri. The Cardinals paid tribute to him by leaving a single light on in right field.

- St. Louis Cardinals (@Cardinals) October 28, 2014Taveras was killed after authorities say he lost control of his 2014 Chevrolet Camaro on a highway in the popular tourist region of Puerto Plata, north of the capital of Santo Domingo. Officials said his 18-year-old girlfriend, Edilia Arvelo, was in the car and also died.

The slugger's father, Francisco Taveras, thanked the crowd for coming and teared up as he spoke at the cemetery.

"I'm extremely devastated about what has happened," he said. "I urge young people to wear their seatbelts and to learn from what happened to my son."

Taveras was considered one of the majors' top prospects, and he hit .239 with three homers and 22 RBIs in 80 games this year. He was scheduled to travel in November to the team's spring training facility in Jupiter, Florida, and then play in the Dominican Winter League.

Taveras was a teenager when he signed with St. Louis as an international free agent in 2008. Before this season, he was ranked as the No. 3 overall prospect by MLB.com and Baseball America.

He homered against the Giants' Yusmeiro Petit in his major league debut May 31 and had a big solo drive in the seventh inning of Game 2 in the NL Championship Series against San Francisco.

"This is a huge loss for us and the Dominican Republic," Matheny said. "He was our weapon off the bench and we had plans for him next year. Even though he was only 22, he wasn't afraid of anything. He had a great heart, and this is a tragedy for us."