Tiger Woods after 11 holes of practice at Augusta: 'It's finally there' 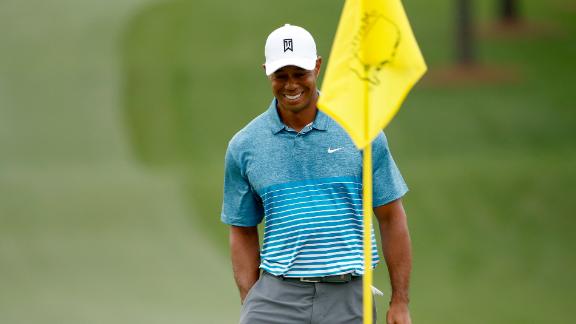 AUGUSTA, Ga. -- After an 11-hole practice round that ended in near darkness at Augusta National on Monday evening, Tiger Woods didn't look or talk like a man who has been burdened by a bad back and a woeful short game.


Woods was all smiles as he approached the big oak tree outside the Augusta clubhouse, where he spoke briefly to reporters after showing off a game that was much better than expected.

"It's been a process," Woods said about his nine weeks away from the game. "But I'm on the good side now."


Asked about the difficulty in making the decision to play the Masters this week, Woods said: "It's a progression. I felt like I had to get my game into a spot where I could compete to win a golf tournament, and it's finally there."


Woods, 39, arrived Monday afternoon, went to the driving range and spent considerable time at the short-game area, where he hit a minimum of 60 chip and pitch shots. He used two bags of balls.


After a warm-up with full shots, Woods went to the first tee and was joined by longtime pal Mark O'Meara, 58, the 1998 Masters champion. Woods hooked his first tee shot into the trees -- a common landing area for his drives on that hole -- but hit an excellent approach to 5 feet.


Over the front nine, Woods hit two approaches for tap-ins at the fourth and seventh holes. He was over the par-5 eighth green in 2 and missed just three greens. A majority of the time was spent hitting pitch shots and putts from various spots on the greens.

Woods was plagued by chipping and pitching issues in the three tournaments he has played since December: the Hero World Challenge, where he tied for last; the Waste Management Phoenix Open, where he missed the cut; and the Farmers Insurance Open, where he withdrew after 11 holes due to a stiff lower back.


That led to a break that will conclude when the first round begins Thursday.


It was unclear if Woods would play Monday, but the practice-round crowd that stuck around got a nice treat, following Woods and O'Meara on the front side.


They even showed off at the par-3 fourth, a tough hole that was playing nearly 250 yards.

"He said, 'Things never change.' I said, 'Exactly.' The game is better when Tiger Woods is playing."


Although O'Meara stopped after the ninth hole, Woods played the 10th and the 18th by himself, with no spectators.


"I felt good. It was nice to get out here. It was a little bit faster than we played it last week," said Woods, who came to Augusta for practice rounds Tuesday and Friday. "Chipping is fine. I wanted to test out some wedges out here. That was why I was chipping a little bit more. It came down to a couple different bounce settings because it's different from Florida. We figured the right one out."


O'Meara said he was glad that Woods asked him to play, as the two had not seen each other for a couple of years. Woods missed the Masters last year due to back surgery, and O'Meara does not see him on tour.


"The thing about the kid is you can never underestimate Tiger Woods," O'Meara said. "He has a great passion. I'm a huge fan, friend. I care about him. It was good to be out there with him today. I saw some good signs. I thought I saw some good signs, to be honest with you, when he played his tournament in Orlando [in December], even though he didn't play well.


"I like what he's doing. I like what he and Chris [Como, Woods' instructor] are doing. His pitching looks a lot better. He's worked really hard on it. There's a lot of pressure on him; there has been his whole life. But if he swings the way he is capable of swinging and pitches and rolls the putter, there's no reason why he can't have a good week."


Woods, a four-time winner, will play his 20th Masters this week. He has dropped to 111th in the world after a long period of injury and inactivity. He last played Feb. 5.


"He'll be nervous on Thursday. We all are," O'Meara said. "And under the gun it's always a little bit different. But never underestimate Tiger Woods."