Tiger Woods: 'It was a lot of work' to get ready for Masters return 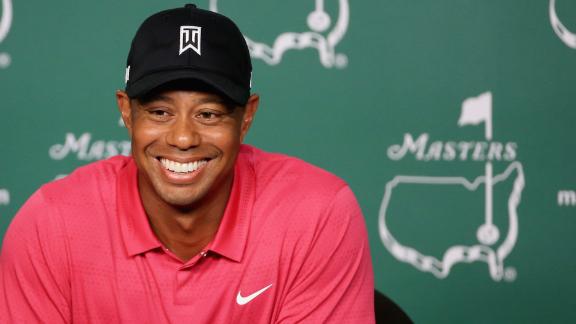 AUGUSTA, Ga. -- Tiger Woods summed it up simply when asked what he has been doing for the past two months to get his golf game ready for a return to competition.


"I worked my ass off," the four-time Masters champion said Tuesday.

Following a nine-hole practice round and lengthy range session, Woods spoke to the media in advance of what will be his 20th Masters, which begins Thursday.


Unlike most other years, when Woods came into the tournament as a prohibitive favorite, he enters the Masters with numerous questions about his game after more than a year of injuries and swing changes sidetracked him.


Woods has played just 47 holes this year. He hasn't played since Feb. 5, when he withdrew during the first round of the Farmers Insurance Open. He then announced a leave to work on his game, which included myriad short-game issues.


"People would never understand how much work I put into it to come back and do this again," said Woods, 39, who will begin play on Thursday afternoon at 1:48 p.m. with Jimmy Walker and Jamie Donaldson. "It was sunup to sundown, and whenever I had free time; if the kids were asleep, I'd still be doing it, and then when they were in school, I'd still be doing it. So it was a lot of work."


Woods said the only issues with his back -- he had surgery a year ago -- were due to the amount of practice time and fatigue, the result of needing to figure out the pitching and chipping woes that shocked golf observers during his two tournaments earlier this year.


"It was more frustration than anything else, because I knew what I could do, and just wasn't able to do it at the time," he said. "It would come in flashes. I would get in these modes where it would come for 10 minutes and I would just have it, just dialed in, and then I'd lose it for an hour; and then I'd get it back. And next thing you know, I'd flip to having it for an hour to 10 minutes of losing it and then it got to a point where it was just there."


Woods made two visits to Augusta National last week and spent considerable time at his home course in Florida, Medalist Golf Club, working on his game.


While there was considerable frustration at times, Woods said there was no moment where things clicked.


Woods said he has not returned simply because it's the Masters; he was ready to play this week regardless.


And he didn't shy away from his typical mandate that he only plays to win, although there is a sense he has tried to soften the expectations a bit by saying "it is a long way" to Sunday.


"I still feel the same way," Woods said. "I want to win. The whole idea is to prepare and do that and I feel like my game is finally ready to go and do that again.


"As I said earlier in the year, I was caught right between two release patterns and I had to get rid of that and make sure I had one release pattern in me. It took a while. It took a lot of hard work that went into it. I finally got to the point where I feel I can do it now."


Woods played 11 holes withMark O'Mearaon Monday and another nine with his longtime friend and practice-round partner on Tuesday.


"He didn't look too rusty," said O'Meara, who won the 1998 Masters. "He hit a couple where it was a little bit off, but he hit a lot of great, quality shots, a lot of quality drives."


Phil Mickelsonplayed in the group behind Woods on Tuesday.


"He seemed to be striking the ball very well," Mickelson said. "He played in front of me today and I saw him hit some shots and it looked impressive. His speed up, the ball is flying long and straight and it looks like he's swinging free without any type of manipulation. It looks really good."


"I think that's the easiest thing to fix," Mickelson said. "His short game has always been astoundingly good. He's won numerous tournaments because of his short game. I just don't think it's a hard thing to get back. He hit a few good chips, hit them close, all of a sudden your confidence is back. It's just not that hard of a thing to get right. Whereas when your golf swing goes south and the ball is flying everywhere, that could take a little while."

Tiger: I am ready to compete
Four-time Masters champion Tiger Woods discusses how excited he is to play the Masters and how his game has improved.