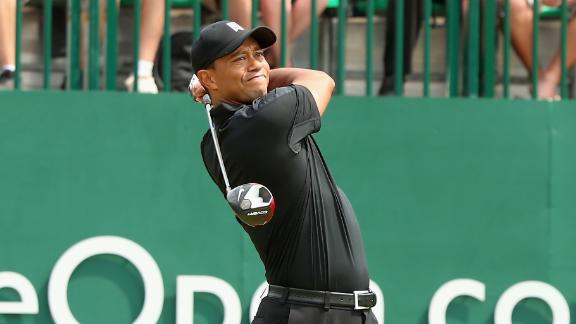 HOYLAKE, England -- The day began with visions of Tiger Woods contending on the weekend to win the Claret Jug. It ended with him needing to hole a 6-footer for birdie just to make the cut on the number.

Woods drained the putt -- his only birdie of the day -- to shoot 77 at Royal Liverpool and make it to the weekend of the Open Championship.

But it wasn't pretty.

Woods made a double-bogey on his first hole, a triple on his 17th when his tee shot barely went out of bounds, and he couldn't come close to finding a fairway with his nemesis club, the driver.

It made for a tense last hole as Woods looked to avoid missing a cut in a major championship for just the fourth time as a professional.

"Not very good," Woods said following Friday's round. "I got off to a terrible start again. I had some opportunities to make a few birdies along the way to get back to even par. And I just never did. Just never made anything. I got myself in good position to make birdies and didn't do it."

But Woods put himself in a bad position with his start.

He decided to hit a driver off the first tee and missed the fairway badly, advancing the ball to a spot near the green that offered a poor lie and a chip across the green. That led to a double-bogey.

Woods pulled the driver again on the second hole, again missing the fairway, then making a bogey.

He is 5-over par for the first two holes -- he played them 3 over for the week in 2006 when he shot 18 under -- but said there is nothing about the holes that bother him.

He ended up using the driver six times -- twice on the 17th where he hit his tee shot out of bounds -- and never came close to hitting a fairway.

Eight years ago, Woods famously won his third Claret Jug at Royal Liverpool by hitting just one driver during the tournament. He hit just one -- on the 16th hole -- Thursday. He played the par-5s that week in 14-under par.

"I was trying to be more aggressive, with the wind the way it was," Woods said. "I could take some of the bunkers out of play and get it down there where I had sand wedge to the green. Even if it's in the rough, it's still sand wedge to the green. Angel [Cabrera] did that yesterday and did it quite effectively in a more difficult wind. I figured today would be a chance where I could be more aggressive and take the bunkers out of play."

Instead, he took himself out of the tournament. After the first two holes, it was surprising that Woods brought the driver back out. The club has given him difficulties in recent years, and given the back surgery he had just 3 ½ months ago, it might be the one that takes the longest to master.

But Woods hit it again at the par-5 fifth and failed to make birdie, as well as on the 16th and 17th holes.

Asked if a 3-wood could have sufficed in the situations where Woods hit a driver, Woods said it wasn't enough club to carry the pot bunkers.

"You either lay up short or go over the top," he said. "I decided to take a little bit more on today."

The 69-77 start left Woods right on the 2-over 146 cut line -- and 14 strokes behind tournament leader Rory McIlroy, who shot his second consecutive 66 and leads Dustin Johnson by four strokes.

"It's not a surprise," Woods said. "[McIlroy] has done this before. He's won both of his majors by 8. When he gets going, he can make a lot of birdies. And he plays pretty aggressively to begin with. When he's going, he can get it going pretty good."

Woods' 18th-hole birdie helped him avoid a few dubious additions to his resume. He's had just three rounds in major championships where he didn't make a birdie, the last coming during the first round of the 2010 U.S. Open. And he's never missed back-to-back cuts in his pro career, having missed just 11 worldwide.

Woods said Saturday's weather -- which is predicted to be poor for most of the day -- will determine how he plays the course. And he wouldn't rule out a comeback, however unrealistic one may seem at this point.

"It gives me a chance," Woods said when asked how important it was for him to make the cut. "I'm pretty far back. Luckily I have two rounds, and hopefully I can do something like Paul Lawrie did in '99. He made up 10 in one day, and hopefully I can play well on the weekend and at least give myself a shot on the back nine on Sunday."