Tiger Woods to play the Masters 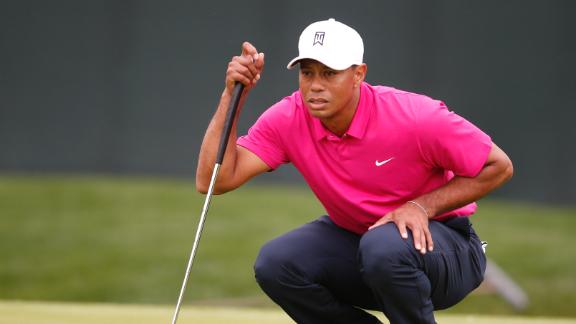 Tiger Woods will end a nine-week absence from competitive golf by playing in the Masters next week at Augusta National.

"I'm playing in the Masters," Woods said Friday afternoon. "It's obviously very important to me, and I want to be there.


"I've worked a lot on my game and I'm looking forward to competing. I'm excited to get to Augusta and I appreciate everyone's support."


The Westgate SuperBook posted prop odds Saturday, including "Will Tiger Woods make the cut?" "No" is listed as a minus-120 favorite. "Yes" pays even money. The over/under on his first-round score is listed at 73.5. A Woods withdrawal pays 5-1.


Woods, 39, a four-time winner of the tournament, had been questionable for the year's first major championship ever since announcing a leave from the game on Feb. 11 to work on issues in his game.


He entered just two tournaments this year and played only 47 holes, missing the cut at the Waste Management Phoenix Open in January and then making it through just 11 holes of the Farmers Insurance Open a week later, citing a stiff lower back.

"He's said all along he's going to come back when he feels comfortable," Woods' agent Mark Steinberg told ESPN. "He gave me a call today and said I'm going to play next week. He makes firm decisions. There was no debating or going back and forth. Only he could determine when he would come back. This was going to be completely 100 percent his decision."


Woods, who had back surgery on March 31, 2014, missed the Masters last year for the first time since his first appearance in 1995 as an amateur. He has 13 top-10 finishes in the tournament but hasn't won it in 10 years.


And indications are his game is not in a place to be competitive.


Woods skipped two tournaments he normally would have played, the Honda Classic and the Arnold PalmerInvitational, and took his Masters participation to this point, suggesting he was unclear if he was ready.

He made separate visits to Augusta National for practice rounds on Tuesday and Friday.


On Feb. 11, Woods announced he would be taking time away to work on his game because, "My play, and scores, are not acceptable for tournament golf. Like I've said, I enter a tournament to compete at the highest level, and when I think I'm ready I'll be back."


Agent Mark Steinberg said Woods has been working hard to get back, mostly at his home course, the Medalist near Jupiter, Florida. Caddie Joe LaCava was with him there Thursday, Golf Channel said.


Golfweek reported via a source that Woods kept score during his Tuesday practice round, shooting 74 with five birdies but also hitting several indifferent chip shots.