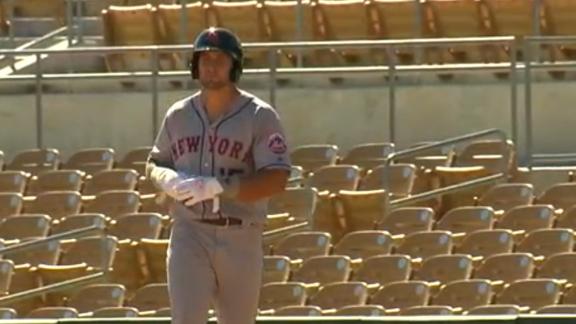 PHOENIX -- In the shadows of University of Phoenix Stadium, where he won a college football national championship with theFlorida Gatorsin 2007, Tim Tebow's sternest baseball test yet got off to a quiet start.

After fouling off a pair of full-count pitches from Washington Nationals prospect Austin Voth, Tebow grounded out to second base in his first Arizona Fall League at-bat. He went on to finish 0-for-3 with a pair of groundouts and a squibber in front of the plate, as his Scottsdale Scorpions beat the Glendale Desert Dogs 9-6 before an announced crowd of 912 at Camelback Ranch on Tuesday.

"Obviously, I wish I could have done a little bit more at the plate and got a couple of hits," Tebow said after his AFL debut. "But it was fun. You've got to knock a little rust off. ... Each day is not just about the result. It's about: What are you learning? How are you improving? How are you going to be able to take that over into spring training?"

On opening day in the league for top prospects, Tebow also caught a routine fly ball and slammed into the wall while pursuing another shot. He logged five innings in left field.

"Where my face went into the wall?" Tebow said with a laugh when asked about his ill-fated catch attempt. "I knew it was hit well, so I just tried to make a play on it. I was going pretty hard and thought I had another step or two and ran into the wall. But I've been hit harder, so I'm OK."

The attendance at the spring training facility of the Los Angeles Dodgers and Chicago White Sox represented about three times the normal crowd for an AFL game. Afterward, Tebow signed autographs for fans down the third-base line.

When one fan had a seizure, Tebow opted to stay with him until paramedics arrived.

"I just remember just being very disoriented,'' Brandon Berry told The Associated Press by phone. "Then I saw Tim."

The 30-year-old said he was OK at home in nearby Avondale, Arizona, after being released from the hospital.

Berry said he didn't remember much after the seizure, except that he told the 2007 Heisman Trophy winner that he cheered for Georgia -- an SEC rival of Tebow'sFlorida Gators.

Daniel Kelly, a Tebow fan from Casa Grande, Arizona, said he met Berry early in the game. Kelly was getting a baseball autographed by Tebow when the seizure began.

Kelly said he and his wife, Samantha, began to pray. Kelly then looked up to see that Tebow was also praying while placing a hand on Berry's leg.

Kelly said Berry appeared unconscious for about 30 seconds before coming to with a coughing fit. Officials from the stadium tended to him while awaiting paramedics from the Phoenix Fire Department.

Kelly said it was near 100 degrees at the stadium and that Berry was with him in the sun for most of the game.

Berry said he has been having seizures since 2013 and was diagnosed with a pituitary tumor in January. He said he had an MRI on Tuesday to monitor his condition before going to the game.

Berry said he isn't a Tebow fan but that he went to the game to take in the spectacle of seeing a superstar, albeit from another sport.

"Like seeing somebody like Chipper Jones when I grew up watching,'' said Berry, originally from Hayesville, North Carolina.

As for the game itself, Tebow did not have the same magic in his AFL debut as when he was reintroduced to baseball two weeks ago in the instructional league.

In Port St. Lucie, Florida, on Sept. 28, Tebow homered on the first pitch he saw. The long ball came in the 29-year-old Tebow's first formal baseball game since a state semifinal as a junior in high school.

"Day 1. I thought it was a good day. I really did -- obviously seeing the pitches," Goodwin said. "This is the first game I got a chance to see him. The plate discipline is going to be key for him -- to try to zero in and get a good pitch. I think he'll be able to do that a little bit more as he gets used to being out there and playing."

As Tebow added, "I felt like I saw the pitches well. I just rolled over a couple -- pitches I should have done more with."

Tebow is expected to play Wednesday and Thursday in the AFL before departing for his college football broadcasting duties with ESPN. He is part of the crew for Alabama-Tennessee on Saturday.

Meanwhile, considering he was playing within walking distance of one of his greatest football moments, Tebow was asked if the proximity made him miss that sport.

"I have good memories in that stadium," Tebow said. "You definitely miss football sometimes. I'm thankful I get to talk about it every weekend. And that's fun. There are times you're like, 'Man, I still love the sport.' It's super fun. But this is also a lot of fun." 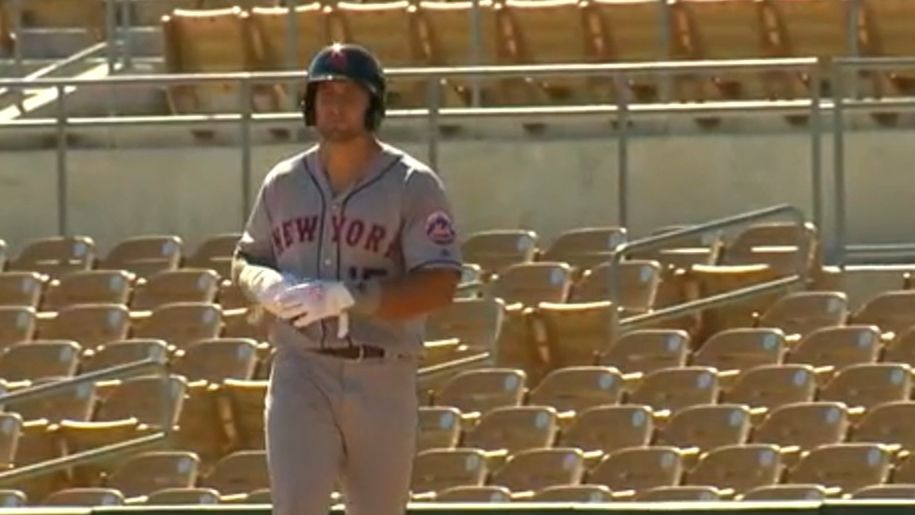