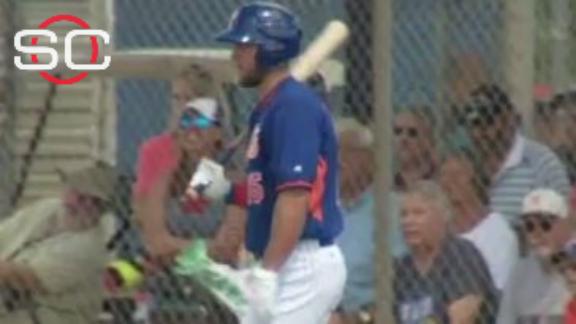 PORT ST. LUCIE, Fla. -- Just count it as another page in the storybook career of Tim Tebow.

Tebow, on the first pitch of his first organized game since a state semifinal during his junior year of high school, hit a 91 mph fastball over the left-center wall for a home run on Wednesday. After circling the bases, Tebow was greeted at the plate by his New York Mets instructional league teammates, who had poured out of the dugout.

Tebow, a former Heisman Trophy winner and NFL quarterback, had quietly taken those teenagers out to dinner Monday and to a movie Tuesday after intrasquad games.

"It's fun to be back out there playing a game, playing a game I love and haven't played in a while, and getting to go compete at it too," Tebow said. "It's really fun."

The crowd, announced by the Mets at 269, also erupted as Tebow connected and circled the bases.

Tebow finished 1-for-6. He logged five innings in left field and cut off the lone ball hit in his direction to hold the batter to a single.

"I liked a lot of my at-bats today," Tebow said. "I felt like I hit the ball really hard four of the six times. Two of the times -- one to short, where we were doubled up, and then one I got jammed on -- those were the two I've got to get the bat around a little faster.

"Four of the at-bats I felt really, really good about. I didn't swing at any breaking balls. I didn't feel like I really got fooled seeing it. I felt good seeing it out on the hand. I was just late on a couple of the fastballs."

The long ball came off 6-foot-5 left-hander John Kilichowski, who was drafted by the St. Louis Cardinals in the 11th round out of Vanderbilt University in June.

"In the first inning a lot of guys will take the first pitch, and you just like to get ahead in the count," Kilichowski said. "And I had some things I wanted to work on because it's instructs and that's what you do. So I just went right in with a fastball and he just hit it out."

Asked if he was at all excited about being on the wrong end of Tebow's attention-grabbing first professional homer, Kilichowski said, "Not really. There's worse things. The guy works hard. He hit the ball hard. You can't be mad at him for that. ... The ability to hit the ball hard, he has to have that. And he did that. It's a step in the right direction for him."

There are five games remaining in the instructional league, although Tebow will be away for the one on Saturday because of his ESPN duties as a college football broadcaster.

Mets officials have suggested that Tebow's performance in the instructional league will determine whether he is ready to be sent to the Arizona Fall League or a winter league, or will just receive individual instruction this offseason. Tebow indicated it's too early to know which path he will take.

"I have no idea," he said. "For me, this is the third day getting to see live pitching. I feel better every day. I'm just enjoying the coaching, enjoying being here. We'll figure that out after next week."

Tebow acknowledged differences between his former career as a quarterback and his baseball pursuit. He noted a pedal-to-the-metal approach doesn't precisely translate from football to baseball.

"Being on your feet for six hours, staying warm and stretched in between innings, that's different," Tebow said. "When you're used to going four to six seconds of relentless effort, and now it's something where you're getting longer breaks, that's a little different."

Still, there are some similarities to his first training camp with the Denver Broncos.

"Having to adjust to a new locker room, new teammates, everything is brand-new for you -- even more so now than Denver for my first training camp there," Tebow said. "But you learn from everything -- the good and the bad. There are so many different things from all of my experiences that I take and bring to this that I think help."

As for why he swung at the first pitch Wednesday, Tebow said, "I just wanted to have the approach that I was going to be aggressive. That's something we've been talking about here every day and practicing it -- and really trying to go gap to gap, and trying to sit on off-speed stuff. But if you get a fastball, drive it, and be aggressive.

"That's kind of my mentality anyway. I like it. It was probably a little high, but I tried to get good barrel on it, and luckily it went out."