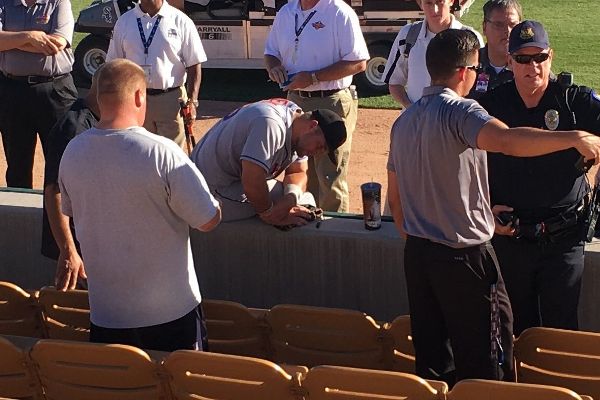 SCOTTSDALE, Ariz. -- Tim Tebow insisted it was an easy decision to remain with a man who had suffered a seizure and briefly lost consciousness while seeking an autograph following the ex-quarterback's Arizona Fall League baseball debut.

The 30-year-old man, identified as Brandon Berry of Avondale, Arizona, was released from the hospital on Tuesday, the same day as the incident.

"Let me ask you a question: What would be more important, that I go to the locker room and I get on the bus and we get back a little bit quicker?" Tebow said Wednesday. "In my opinion, it's not even a choice. It's the right thing to do. It's what you're supposed to do, in my opinion.

Tebow acknowledged that Berry regained consciousness as he placed a hand on Berry to pray.

"The guy that I was signing for, he turned to his right, and I could see on his face something happened," Tebow said. "So then I looked over. I saw Brandon, right as he was getting to the ground and going into a seizure. I just wanted to be there and pray for him."

Tebow said he plans to reconnect with Berry soon.

Tebow kept the mood light after Berry regained consciousness by asking if he liked Batman. Tebow later gave Berry a hard time about being a Georgia football fan.

Tebow said the incident put into the proper context his 0-for-3 Arizona Fall League debut earlier that afternoon.

He noted that while he played for theDenver Broncos, he frequently had a "Wish Kid," from the Make-A-Wish foundation, on the sideline for each game. He found the experience helped him as much as the children, because it reminded him how unimportant it is when people judge him based on his on-field performance.

"People are what's important," he said. "And an opportunity to help someone is more important than anything that I could have possibly done on a baseball diamond that day."

Still, Tebow insisted his contribution to ensuring Berry regained consciousness was not a miracle -- although he would not dismiss the entire situation being labeled that way.

"As far as me and a miracle, no," Tebow said. "But in the God that we serve, yeah, I do believe in miracles."

Tebow's Arizona Fall League play continued Wednesday night for the Scottsdale Scorpions against the Salt River Rafters. The night game was his first under lights in more than a decade.

Tebow finished 0-for-3 with an RBI, walk and strikeout on Wednesday in his second AFL game. He is now hitless in six AFL at-bats. The RBI came when he hustled to beat out a would-be 4-6-3 double play in the fourth inning. Tebow played the full game in left field.

"I probably got asked 10 times by guys on my team: 'When's the last time you played a night game?' " Tebow said before the game. "I was like, 'Well, it was my junior year in high school.' ... I always loved night games. Those have that fun, high school feel."