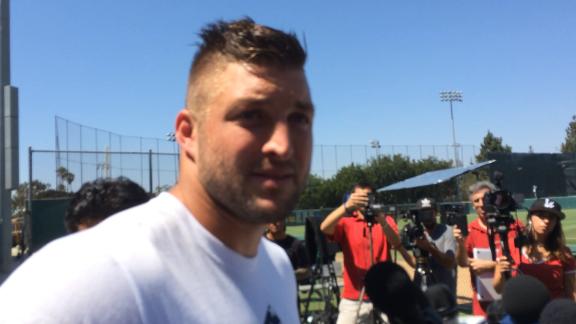 Tebow got mixed reviews after a workout that lasted more than two hours before an audience of roughly 20 MLB teams at Rod Dedeaux Field on the campus of the University of Southern California.

According to one scout, Tebow showed a below-average 40 grade arm on the 20-80 scouts scale. Tebow caught everything hit to him during shagging, but struggled with his footwork a couple of times.

"This form of workout is a little different than what I'm used to but I had fun. I think it went pretty well," Tebow said after the showcase.

The plan called for Tebow to run a 60-yard dash for scouts, then show his arm before shagging fly balls in the outfield and throwing to bases. He was then scheduled to take batting practice before seeing "live'' pitching from former Seattle Mariners closer David Aardsma and other pitchers with professional experience.

Tebow saw a total of 58 pitches during the batting practice and "live pitching," hitting one home run during his performance at the plate.

"Today was the worst I've seen him. It looked like he was trying really hard, overswinging a bit. It's what you do when you've got 200 people and cameras everywhere and you're the only guy they're watching," Aardsma said to the Los Angeles Times after pitching to Tebow at USC.

Tebow, who attempts to rekindle a baseball career that ended when he was a high school junior in suburban Jacksonville, Florida, in 2005, told reporters that he's determined to pursue baseball as hard as he can and he's not afraid of failing.

"This isn't about publicity. It's definitely not about money. I took a pay cut to do this. For me, you pursue what you love regardless of what else happens. If you fail or fall flat on your face, and that's the worse thing that can happen, it's OK. When did pursuing what you love become such a bad thing? I'll make all the sacrifices to be the best I can.''

Tebow's pursuit of a baseball career has elicited strong reactions pro and con. Baltimore Orioles manager Buck Showalter and outfielder Adam Jones are among those who've made comments or social media posts either poking fun at or disparaging his attempts to play baseball after an 11-year absence from the sport.

Conversely, Aardsma and former big league slugger Gary Sheffield have pronounced themselves pleasantly surprised over Tebow's progress as a hitter.

Ohio State coach Urban Meyer, who teamed with Tebow to bring Florida national football titles in 2006 and 2008, called Tebow an "incredible'' high school baseball player whose quest to play the sport professionally should be taken seriously.

"I'm very biased, and everybody knows that, but don't count him out,'' Meyer told ESPN.com Monday.

Tebow has been working out since late May with former big league catcher Chad Moeller, who runs a baseball school in Scottsdale, Arizona. Moeller said he's spent about 80 hours with Tebow working on hitting and fielding and talking baseball over the past three months.

"From what I've seen and have continued to see, people will be surprised,'' Moeller said before the workout. "They'll be more than surprised.''

Tebow not afraid to fail
Tim Tebow says he'd rather pursue baseball with all his effort, even if that means potentially failing, instead of not trying and always wondering if he could make it.
Related topics:
sportsespnmlbuscworkouttim tebowtebow
Copyright © 2021 ESPN Internet Ventures. All rights reserved.
More Videos
From CNN Newsource affiliates
TOP STORIES