Tim Tebow throws for 2 TDs, not worrying about QB competition 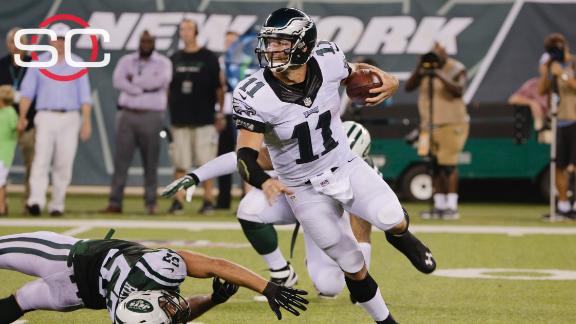 Tebow, whose NFL career stalled after playing for the New York Jets in 2012, is competing with Matt Barkley for the Philadelphia Eagles' No. 3 quarterback job.

"I'm not going to worry about what I can't control," Tebow said after the game. "It's a blessing being able to come out here and play this game that I love. It was a lot of fun out there tonight. It was a blast."

Asked whether he'd be anxious Friday, knowing the Eagles' coaching staff would be evaluating him and deciding his fate, Tebow quoted Philippians 4:6.

The two touchdown passes were the first of the preseason for Tebow, who also has one rushing touchdown.

Barkley finished the preseason with 27 completions on 52 attempts for 351 yards. He had two passes intercepted.

Tebow completed 21 of 36 passes for 286 yards. He threw two touchdown passes and one interceptions, all in Thursday's 24-18 loss to the Jets.

"I think I'm getting more and more comfortable with the offense, getting into more of a rhythm," Tebow said. "Especially on first down -- getting the first first down, which is big in this offense."

To get a fairer evaluation, Eagles coach Chip Kelly had the quarterbacks alternate quarters. Barkley played the first and third quarters, and Tebow played the second and fourth quarters. That allowed Tebow to play under similar conditions rather than relegating him to the second half against lesser competition.

Tebow looked sharpest running the two-minute offense late in the second quarter. He avoided the Jets' pass rush, completing one pass and running for a 17-yard gain. Tebow then completed consecutive passes to Raheem Mostert for 28 yards and Quron Pratt for 23 more.

From the Jets' 12, Tebow threw the ball away on first down and was sacked for a 6-yard loss on second down. The Eagles called a timeout with 30 seconds left in the quarter. Tebow came out and fired an 18-yard touchdown pass to rookie wide receiver Rasheed Bailey.

In the fourth quarter, Tebow threw a 45-yard pass to wide receiver Freddie Martino. That was the big play in a drive that ended with a 9-yard touchdown pass to Martino.

On the play, Tebow avoided a defender and sprinted to his left. He threw a pass that Martino caught while keeping his feet in bounds along the sideline.

"I was going to run for it," Tebow said. "The corner came up, and I was kind of in between. Then Freddie did a good job of staying on the outside and came up with a great catch."

The Eagles didn't get very far on Tebow's first three possessions. The first drive, which featured a 28-yard catch-and-run by Mostert, stalled in Eagles territory. Tebow's passes to Mostert and Bailey were on target but incomplete.

After a Jaylen Watkins interception gave the Eagles the ball at the Jets' 4-yard line, Mostert ran the ball on three consecutive plays. Tebow didn't get a chance to make a play, and the team settled for a 20-yard field goal by Kip Smith.

Barkley said he was "excited" about the opportunity to start a game, but he got off to a rough start. After completing a short pass to Mostert for a 5-yard gain, Barkley threw deep for wide receiver Josh Huff on second down.

The pass was underthrown. Jets cornerback Darrin Walls intercepted the ball at midfield. The Jets took over at their own 46 and drove 54 yards for a touchdown.

"That was not ideal," Barkley said. "There were ups and downs in this game for everyone, but you definitely do not want to start like that."

In the fourth quarter, Walls intercepted a Tebow pass to complete his evening.

"Fourth down and long, that's the call," Tebow said. "We've got to throw it in there. You're forcing that in there."

Barkley's second drive ended with an Eagles field goal. Mostert did most of the work on the drive, but Barkley did convert a fourth-and-8 play from the Jets' 29-yard line. Barkley found tight end Trey Burton for a 21-yard gain.

Tebow, Eagles fall to Jets
Tim Tebow connects on 11 of 17 passes for 189 yards with two touchdowns and an interception in Philadelphia's 24-18 loss to New York.

Tebow stages another late comeback
Tim Tebow turned in his best performance in the Eagles' final preseason game. NFL Eagles reporter Phil Sheridan says that, with two touchdown passes against the New York Jets, Tebow may have won his competition with Matt Barkley for a roster spot.