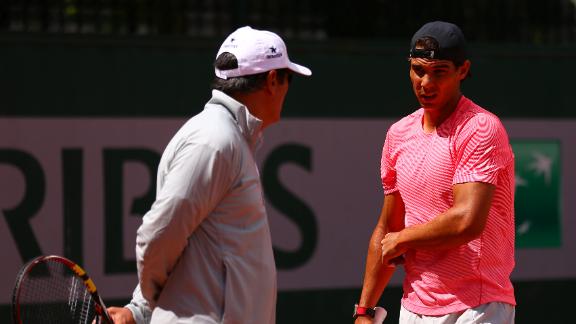 BARCELONA, Spain -- Rafael Nadal's coach criticized the appointment of a woman as the captain of Spain's Davis Cup team on Tuesday, arguing there are substantial differences between the men's and women's games.

"It is preferable that (the captain) is someone with a background in the world of men's tennis," Toni Nadal, Rafael Nadal's coach and uncle, told Onda Cero radio.

"I have nothing against her, I don't know what her capabilities are, and I hope she does her job well, but in theory she is a person that doesn't know men's tennis, because men's tennis isn't the same as women's tennis.

"The truth is that the men's game isn't the same as the women's game on the tactical level, not that one is better than the other."

The comments have been labeled sexist by Spain's leading political parties and come just days after others in tennis lauded the decision to choose Leon as captain.

Toni Nadal said he would have agreed with the decision if "you could tell me that she had spent 10 years coaching" on the men's circuit. He added that he expected the job to go to a former men's player, such as Juan Carlos Ferrero, to continue the recent line of Albert Costa, Alex Corretja and Moya.

The 40-year-old Leon, who was introduced as captain Tuesday, said she was prepared for the job.

"I am not here to create a debate over sexism, rather to help Spain win the Davis Cup again," Leon said.

And as for possible awkward moments in the changing room, Leon said "that's not going to be problem. You just knock."

Regular Davis Cup member Feliciano Lopez defended Toni Nadal from charges of sexism, but said that he and the other players would adapt to having a woman as a coach.

"What Tony wanted to say is that it would be strange having a woman in the changing room, but that won't be a problem since it will only mean getting used to it, just like when men coach women's teams," Lopez told Spanish state television.

Andy Murray, coached by Amelie Mauresmo, tweeted his congratulations to the 40-year-old Leon on Monday.

The appointment of Leon "will help end prejudices" said Alfonso Alonso, parliament member of the ruling Popular Party, while Socialist parliament member Antonio Hernando said, "It's best to call things by their name -- these are sexist comments."

While the Davis Cup team has never had a female captain, the Fed Cup team had a male captain, Miguel Margets, from 1993 until 2011, when Arantxa Sanchez Vicario took his place.

Rafael Nadal last played for Spain a year ago. Spain has lost both of its ties without the 14-time Grand Slam champion. Its 3-1 loss at Brazil last weekend relegated the five-time champions from the World Group for the first time since 1999. That led to Moya's decision to turn down the federation's offer to continue.

Toni Nadal said Leon's appointment would not stop Rafael from returning to the team.

"I will introduce them," he said.

Leon played 651 WTA matches and won one title at the Madrid Open in 2000, the year she reached her highest rank of 27. She played in the Fed Cup in 1996-97, 1999 and 2001. After retiring, she coached female players, and in June became the first woman to be appointed sports director of the Spanish tennis federation.