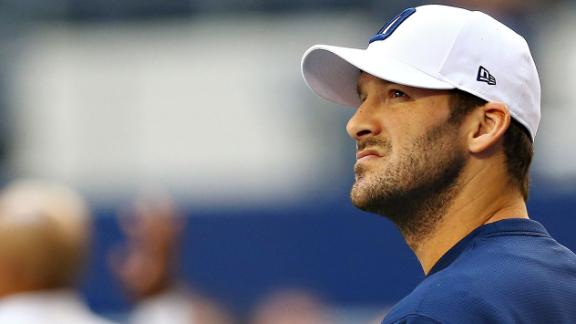 LONDON -- Dallas Cowboys quarterback Tony Romo did not practice Wednesday and remained at the team hotel for treatment as the team begins its preparation for Sunday's game against the Jacksonville Jaguars.

Romo took part in the walk-through at the team's hotel, but he is following his normal practice-week schedule. He has not practiced on a Wednesday since Week 2.

Coach Jason Garrett said the hope is that Romo will be able to practice Thursday.

"Following the normal schedule but also listening to his body," Garrett said before Wednesday's practice at Saracens Rugby Club's Allianz Park. "We had a good, productive walk-through at the hotel today and we anticipate him adopting that schedule that we've had for most of the year."

"It seems like he's moving around well," Garrett said.

The Cowboys, however, have not determined whether Romo will start Sunday. Brandon Weeden took the first-team snaps Wednesday, as he has done for the last seven weeks.

Garrett said the decision will be a medical one with input from Romo. The quarterback has followed the general timetable other players who have had these injuries have followed.

"When you're talking about the player's ability to function and how he feels it's always [a gray area], so honest feedback is important," Garrett said. "Honest evaluation is important, what we see, how he feels, and what we do, those things are a constant discussion. That's not only with Tony; that's with everybody on our football team. We have to make the best decisions during the week to get him ready to play on Sunday to make the best decision on Sunday."

Right tackle Doug Free (foot) and left guard Ronald Leary (groin) took part in the portion of practice that was open to the media. Free has missed the last three games. Leary did not play last week against the Arizona Cardinals.

Romo Sits Out Practice
Todd Archer breaks down the latest on Tony Romo, who has not practiced since getting injured against the Redskins in Week 8.

Romo In London
Ed Werder discusses the treatment QB Tony Romo had prior to the team leaving for London to play the Jaguars on Sunday and the fact that Jason Garrett said Romo would not travel unless he was going to start.