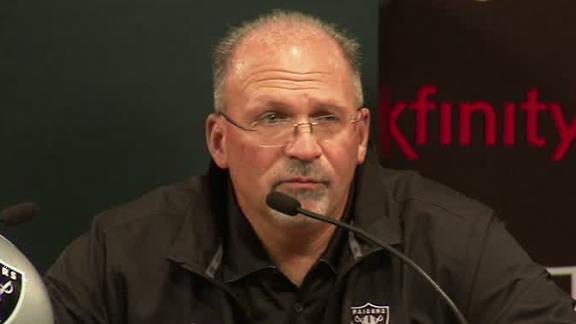 ALAMEDA, Calif. -- A "frustrated" Mark Davis said he stands behind general manager Reggie McKenzie and new interim head coach Tony Sparano as the Oakland Raiders try to bounce back from a 0-4 start and the firing of coach Dennis Allen.

However, Davis said it is imperative the Raiders improve.

"The way we were losing was frustrating," the Raiders owner said after the news conference to announce Allen's firing and Sparano hiring for the rest of the season. "I think it's just the way we lost some of the games, yeah, I think we weren't in them. To me, that's not what the Raiders are ... In my analysis, I think we do have players that can play in this game. And I just think that there may be some changes in how the schemes are utilized. Dennis is the one who has taken the fall for it."

Davis said it was McKenzie's decision to fire Allen and that he agreed. McKenzie chose Allen in 2012 after Mark Davis made McKenzie the primary decision maker of the franchise in the first move after the death of his father, Al Davis, in November 2011.

Allen was 8-28 as the Raiders coach and they have lost a league-high 10 games dating to last season.

Asked if it was a mistake to keep Allen after consecutive 4-12 seasons, Allen said "No, that was Reggie's decision and you see where it ended up. So, I don't know if you'd call it a mistake."

McKenzie said in the news conference that he will hire the next coach. Yet, he said he realizes nothing is guaranteed with his own job security.

"A lot rides on me," said McKenzie, whose drafting and free-agent signings have yet to pay dividends on the field in Oakland. "I brought Dennis here to win and that did not materialize."

Davis said he has not considered firing McKenzie. However, if the losing continues, Davis made no promises. He said it could be considered "a step backward or step forward" to fire McKenzie, depending on how this season goes. Davis said he will take an increased role in hiring decisions going forward.

Davis said he wasn't sure when asked if he would contact former Oakland coach and current ESPN "Monday Night Football' analyst Jon Gruden.

Davis said McKenzie can start looking for a permanent new coach now to hire after the season. But he also said Sparano will have the opportunity to show the team he can be the permanent coach. Sparano, 52, was the head coach in Miami from 2008-2011. He went 29-31 there.

"I think my evaluation is that we do have some players," Davis said. "And we may be running some schemes that are putting a square peg into a round hole, and that maybe with some changes in that type of environment we might be able to get something out of these players."

Asked what the Raiders' biggest problem is, Sparano said the team had forgotten "how to win. ... They have to get that taste back."