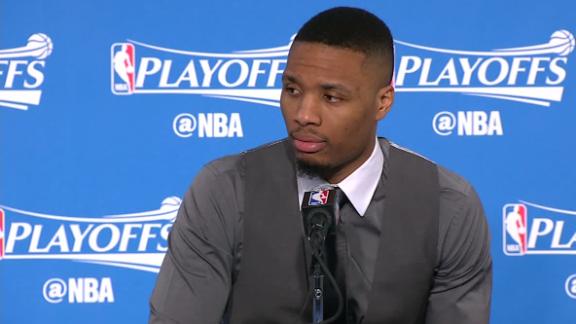 OAKLAND, Calif. -- The first-round playoff matchup between the Golden State Warriors and Portland Trail Blazers is almost certain to be a high-scoring series, and it also appears it will be a trash-talking series.

Warriors forward Draymond Green, known for being verbally provocative, had a few verbal confrontations with Trail Blazers guards Damian Lillard and CJ McCollum in Game 1 on Sunday afternoon, and all three players welcome it.

"For me, it's just going to make me raise the level of my game because I take [Green's trash talk] as a challenge," Lillard said after his team's 121-109 loss. "I'm going to take exception to it, and I'm going to say something back. That's what it's going to be, as long as that's how he's approaching it -- it's going to be coming right back."

It started near the end of the first quarter when Lillard attacked the basket for a dunk attempt and was rejected by Warriors reserve big man JaVale McGee. However, the officials called McGee for a personal foul.

The Warriors were outraged, believing it was a clean block. As Lillard walked to the free throw line, Green uttered some words, and the two jawed back and forth during the entire free throw trip.

"I think having a guy like that on the floor, I think it raises the level of the game, because I don't even talk trash, and he was saying so much out there that I had a whole lot to say tonight," Lillard said of Green.

In the fourth quarter, Green dribbled the ball the length of the court and elevated for a dunk. However, he muffed the jam and the ball sailed out of bounds.

McCollum, who was seen grinning, took it upon himself to give Green a taste of his own trash-talking medicine.

"Yeah, he told me I need to do more calf raises," Green revealed. "No, we were talking back and forth the entire game, but that's just a part of the game. It's mutual respect both ways. We've played those guys last year in the series, but quite a bit over the last four or five years where you kind of know them, they know you.

"But we all know each other off the floor as well. It's not like there's anyone out there being disrespectful towards another. It's fun. You hit a shot, he's talking to us. I hit a shot, I'm talking to them. I miss the dunk, he's telling me I need to do calf raises. It was good back-and-forth; it makes the game a lot more fun, that's for sure."

McCollum admitted to the verbal calf jab and made it clear that he won't shy away from mixing it up with Green word for word.

"Yeah, he does need to do some calf raises so he can dunk," McCollum said with a laugh. "Yeah, it's a game. It's a game we all love. We come out here, represent our teams, representing our hometowns where everybody's from. And where I'm from, if you talk trash, then I'm going to talk trash to you. It's not disrespectful. We're not talking about nobody's mamas or nothing bad.

"But I've known Draymond Green since he was atMichigan State. He was a little chubbier at Michigan State. He's done really well with himself. He's worked hard. If I have something I want to say, I'm going to say it."

Through all the chatter that may occur in this series, Lillard said he respects and appreciates what Green brings to the game.

"I think the league has softened up a lot, and it's not like that, so you've got to have a rough guy like him out there," Lillard said. "I think it's necessary. I think their team depends on him to be that dog out there and to be that person."
Related topics:
sportsespnpostseasongolden state warriorsdraymond greendamian lillardtrash talkcj mccollumgswnba playoffsnbaportland trail blazerswestern conference
Copyright © 2022 ESPN Internet Ventures. All rights reserved.
TOP STORIES
SF couple gets $1,500 fine for parking in their driveway
Hospitalized Daily Harvest customer tried to warn CEO
LIST: Bay Area 4th of July events
Hidden Gem: $10 trip on SF Water Taxi
Thousands of dead anchovy wash ashore, fall from sky in Marin Co.
Roe v. Wade decision shaking up college application process
New California laws taking effect on July 1
Show More
50 Blocks: Stories from the Tenderloin
SFO travelers prepare for possible delays, cancelations this weekend
Dog owners blame pet deaths, disappearances on dog trainer
Oakland A's one step closer to new stadium at Howard Terminal
Omicron subvariants BA.4, BA.5 'are taking off like wildfire'
More TOP STORIES News