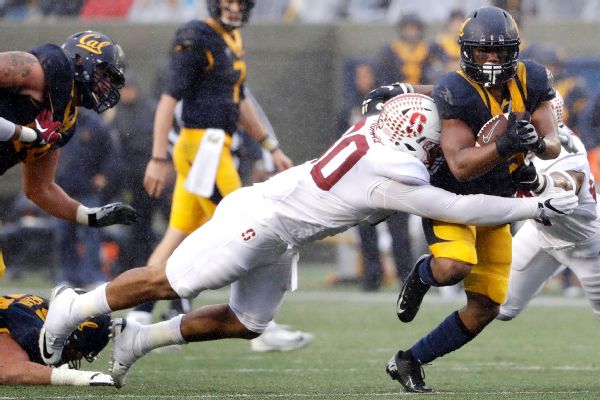 BERKELEY, Calif. -- California running back Tre Watson will miss the rest of the season because of an apparent right leg injury.

The senior got hurt after catching a screen pass from Ross Bowers late in the first quarter of California's 33-20 win over Weber State on Saturday. Watson limped off the field but returned in the second quarter and carried once before going down again, this time for good.

"You feel for a guy like that that's put in so much time and effort into the program," Bears coach Justin Wilcox said Monday. "We'll have his back. Now it's going to be the next man up at that positon. He'll bounce back from this, but it's never easy going through that."

Watson wore a thick black brace on his right leg and used crutches Monday. He spoke briefly with Wilcox at the end of practice but did not stick around to talk to reporters.

Wilcox declined to discuss specific details of Watson's injury or whether it would require surgery.

Patrick Laird replaced Watson and rushed for 191 yards and three touchdowns on 12 carries against Weber State and likely will continue to get the bulk of playing time.

Watson was expected to be a centerpiece of California's offense after he rushed for 709 yards and four touchdowns in 2016.

A preseason candidate for the Doak Walker and Paul Hornung awards, Watson entered the season as Cal's active career leader in rushing and all-purpose yards. He ran for 52 yards and had another 32 yards receiving against North Carolina in the season opener.

Watson got off to a decent start against Weber State, with 31 yards on six carries before he got hurt.

"It's tough," Wilcox said. "You put so much into it, and you feel for a guy that goes through that. It's an unfortunate reality of this sport that those things happen. He's a guy that will be able to come back from it, though. He's just got that about him. He'll be moving forward as soon as they start the process, and then we'll be there for him."
Report a correction or typo
Related topics:
sportsespnkneetre watsoncalifornia golden bearscollege footballleg
Copyright © 2022 ESPN Internet Ventures. All rights reserved.
TOP STORIES
Plastic face shields shredded at Hollister recycling center
SJPD responds to shooting involving officers, carjacking suspect
Marin residents baffled by 'disturbing' loud booms in the night
San Jose on pace to surpass traffic death record after 2 deaths
TX mom pregnant with 6th child dies from COVID complications
Home mortgage appraisal industry under scrutiny in new report
Calls for dog trainer regulations renewed as families mourn lost pets
Show More
Doorbell cam, audio captures deadly mountain lion fight in Belmont
Police investigating shooting at Hillsdale Mall parking lot
Suspicious device found near Oakland federal building was a hoax
BART responds after scathing report calls agency 'unreliable'
Police: Suspected killer of LA student had prior arrest in Bay Area
More TOP STORIES News