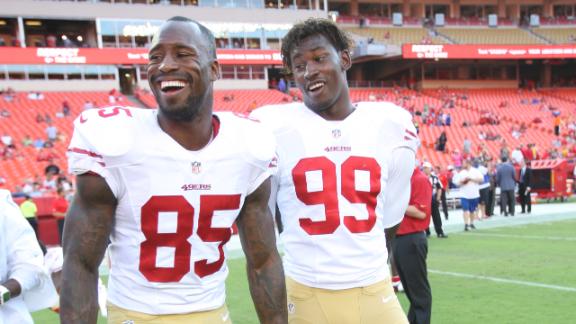 SANTA CLARA, Calif. -- San Francisco 49ers general manager Trent Baalke wants to re-sign oft-troubled outside linebacker Aldon Smith, is open to retaining tight end Vernon Davis after a down season and is intrigued to see how quarterbackColin Kaepernick's offseason tinkering with his throwingmotion pays off in the regular season.

The trio of topics was among many subjects broached by Baalke during an impromptu meeting over dinner with beat reporters at Levi's Stadium Tuesday night following the team's fourth practice of training camp.

"Aldon's like any young player," Baalke said. "He's growing up, he's maturing. You see that with a lot of these guys. Some of them get themselves in a few more situations that you wish they didn't ... (but I'm) really pleased with the way he's handled things, the way he's working both personally and professionally. I think he's doing an outstanding job. He's always been a great teammate. He's always had an excellent work ethic. Those are things he's even stepped up.

"We're going to work hard to make sure that he remains here."

Add that to a $2 million bonus he'd earn for playing more than 50 percent of the Niners' defensive snaps or recording eight sacks, the more than $1.6 million in already earned roster and offseason workout bonuses and his $1 million base salary, and Smith will have earned the entire original salary.

Asked if he'd prefer to re-sign Smith, who missed five games while in rehab two years ago and served a nine-game NFL-mandated suspension last year, before the season or let it play out -- the Niners can cut Smith free with a negligible cap hit if he runs afoul of the law again -- Baalke blanched.

"We don't talk about what we're doing within negotiations," Baalke said. "I think he understands, his agent understands what we would like to do, and we're going to work hard at it. Now when that gets done, if it gets done during the season, I can't answer that.

"He knows where we stand and my understanding is he would love to be here, and we would certainly love to keep him here."

Regarding Davis, whose 245 yards receiving and two touchdowns were career lows, Baalke also sees a refocused player, one who fired his financial adviser last year while admitting he was not as focused as he should have been.

"He wants to be here long-term," Baalke said.

"We're always going to try to keep our own. Sometimes it works. As you've seen, sometimes it doesn't. But Vernon and I have had conversations, and we'll leave it at that. He understands where we are, and we certainly understand where he is."

Kaepernick, meanwhile, has shown mixed results early in camp. His release still exhibits signs of a hitch at times, an elongated baseball pitcher's delivery at others. He spent six weeks working with two-time league MVP Kurt Warner in Arizona this spring.

"The only thing that matters at the end of the day is, are they accurate?" Baalke said of Kaepernick's passes. "It doesn't matter how it gets there, how it looks, what the release looks like.

"I remember Aaron Rodgers coming out. Aaron was at Cal, if anybody remembers him, the way he was taught, very high (delivery), never drop the ball down, very tight shoulder. One release, one release point, no matter what. Never thought in a million years he would look like Brett Favre in terms of all the different arm angles. Now you watch him, he throws it sideways.

"So I guess the point I'm making is, as long as the little things (Colin) continues to do allow him to change the arm angles and the trajectory so that every ball doesn't look the same and every release isn't the same, that's what you're looking for."

Baalke was in his first season as the Niners' western region scout in 2005, when the Niners selected Alex Smith first overall, and Rodgers fell to the Green Bay Packers at No. 24 overall.

"Now, the only way you get better at it is repetition and repetition under fire, because we could all do it, to a degree, in a one-on-one on air, but then as you build the tempo of the game up, you tend to go into different habits, or old habits," Baalke said. "But nobody works harder (than Kaepernick)."

A year ago, as Kaepernick's total QBR fell from 68.6 to 55.9, many observers wondered if Kaepernick and his unique skill set were being placed in the best position to succeed.

Plus, there's always a question of "touch" when it comes to Kaepernick.

"To throw with touch is different than throwing with velocity," Baalke said. "And then, what touch? Is it down-the-field touch? Is it short-pass touches? A lot of times, marrying the scheme to what the quarterback does. Like Aaron Rodgers, nobody in the business gets the ball out as quick as Aaron Rodgers. ... Some guys can't do that. So that doesn't mean they can't play the position. It just means there's certain things, schematically, you're not going to ask them to do.

"And I think that's an important factor anytime, for any position."