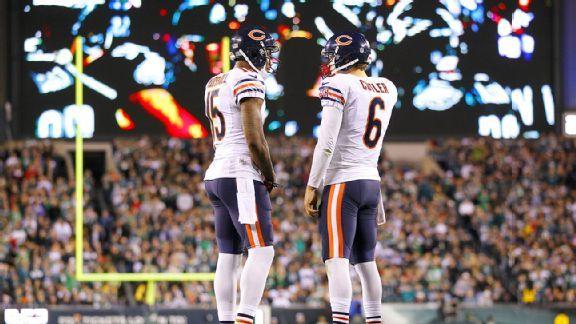 Chicago Bears coach Marc Trestman disputed the notion that receiver Brandon Marshall called out quarterback Jay Cutler during a few tense moments in the locker room on the heels of the club's 27-14 loss Sunday to the Miami Dolphins, but also said "I didn't hear all of it."

A source inside the locker room after the game said that some of Marshall's diatribe was aimed at Cutler, who turned over the ball twice in the loss, leading to 10 points by the Dolphins.

"I don't think that was the case at all yesterday," Trestman said. "I heard a lot about most of it, but what I did hear I did not hear any of that."

Cutler threw an interception and was credited with two fumbles (one came as the result of Ka'Deem Carey dropping a lateral). In all four of the team's losses this season, Cutler has turned over the ball multiple times. Yet in the team's three victories, Cutler didn't commit a turnover. Opponents have averaged 9.25 points off Cutler's turnovers in each of the team's losses.

The disappointing loss led to Marshall's impassioned postgame speech in the locker room, and a few pointed comments after the game.

Cutler passed for 190 yards and a touchdown, but was sacked three times and finished with a passer rating of 74.4. Marshall caught six passes for 48 yards on 10 targets.

"What I understood happened after the game was players expressing themselves in different ways, at their disappointment in the loss," Trestman said. "I'll leave it at that. That's really ultimately what happened, and I don't think it's anything more than that. In my experience, people get it out of their system. I've heard players express themselves dramatically in wins, too, that they were angry we didn't win the right way or that we weren't as good as we can be. It goes both ways. I'm not reading any more into it than that."

Asked specifically whether he believed there was a rift between Cutler and Marshall, Trestman said, "I don't see it at all."

"They've been around each other a long time," he added. "I think there's a brotherly love involved in their relationship. That's how I see it."

Given the duo's closeness, Trestman acknowledged Cutler and Marshall might have a unique relationship that affords them the ability to be critical of one another behind closed doors.

"I absolutely did not hear any of that," guardKyle Longsaid in an interview Monday on ESPN 1000. "I don't know what was going on. I don't think we have an issue. We were there today.We were there in meetings. We're grownups, if we have issues with one another we can talk to one another. That's just how it goes."

Left tackle Jermon Bushrod acknowledged there was a heated exchange in the locker room, but called it a matter of players expressing their emotions.

"Getting into the whole locker room deal, at the end of the day, things that are said, those are issues we deal with," Bushrod said. "Guys show emotion, everybody's not the same. Some guys handle things different. That's OK. But at the end of the day, we have to come together for the common cause. We have to stick together more than ever now because we lost another game.

"When locker room issues become public issues ... that's not going to happen here. We're going to continue to protect each other. We're a team. This is a team game. We are not going out there as individuals. We have to have each other's backs, and we understand that when things like that happen, we just have to know how to deal with it in certain ways. We just have to keep our eyes on the prize, and we can't have a bunch of different opinions in our locker room because we have to stick together. If we don't stick together, then it's not good."