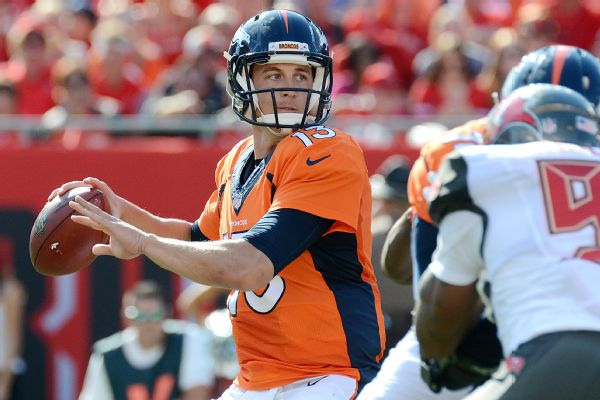 ESPN
By Jeff Legwold
TAMPA -- Denver Broncos quarterback Trevor Siemian will have a left shoulder injury examined more Monday when the team is back in Denver, but he said Sunday night his "plan'' is to be ready to play against the Atlanta Falcons next Sunday.

Siemian left Sunday's 27-7 Broncos win over the Tampa Bay Buccaneers after being sacked by Buccaneers defensive tackle Clinton McDonald just before halftime. Siemian was 5-of-7 passing at the time for 68 yards and a touchdown.

Rookie Paxton Lynch entered the lineup and closed out the game as he finished 14-of-24 passing for 170 yards and his first career touchdown. Both Broncos coach Gary Kubiak and Siemian said they believed Siemian could have re-entered the game if needed.

Siemian was in obvious discomfort after the sack, but he stayed in the game for one more play -- a 6-yard run by rookie running backDevontae Booker-- and then he approached Broncos head trainer Steve Antonopulos at the two-minute warning.

The Broncos led 17-7 when Siemian went to the sideline.

"I can tell you we felt like we could have put him back in the game,'' Kubiak said. "We really like the job Paxton did, handling himself, handling the team well, so we stayed with it ...We feel fortunate, we'll go back and see where (Siemian) is at.''

Siemian said, as he prepared to leave Raymond James Stadium on Sunday night, that he'll see what the Broncos' medical staff says on Monday, but that he believed he would be able to play against the Falcons on Sunday in Denver.

The Broncos' initial diagnosis was a bruised left (non-throwing) shoulder, but he will be checked again Monday morning. Siemian said he was uncertain if he would be taken for a MRI exam.

Antonopulos told Siemian he should come out of the game to see if the injury settled down. So, Lynch came in on third down to finish out the half then the game.