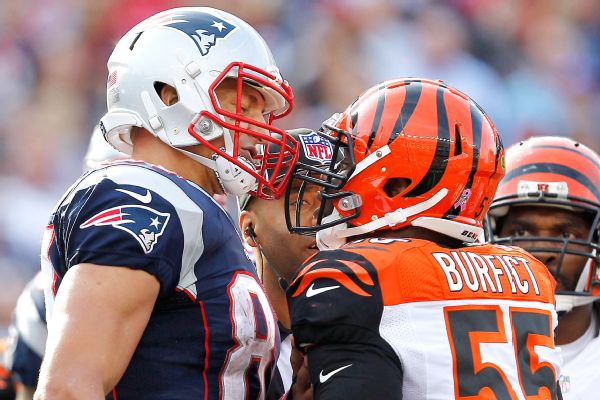 The NFL is reviewing two plays Sunday by Cincinnati Bengals linebacker Vontaze Burfict -- a low hit on New England PatriotsTEMartellus Bennett, who said Burfict apologized after the game and stated it wasn't intentional, and an alleged stomp on Patriots RB LeGarrette Blount after a late touchdown.

The Bennett play came with 11:22 remaining in the fourth quarter of the Patriots' 35-17 win, on third-and-2. Burfict was seen lunging at the lower left leg/knee of Bennett as a pass was thrown downfield to receiver Danny Amendola for a 17-yard gain. Burfict's lunge might have been the result of QBTom Brady's pump fake in that direction. Burfict also appeared to stub his left toe as he reacted to the fake.

Regarding the second play, coaches' film of the game appeared to show Burfict deliberately stepping on Blount's leg after his late fourth-quarter touchdown run, as Blount lay on the ground.

In reference to the first play, Bengals coach Marvin Lewis said he wasn't concerned because "the league looks at every play."

"From our coaching standpoint, we want to make sure, as we come in to defend the ball, we are able to defend with the arms so you have the chance to get the ball loose and off of them."

Patriots coach Bill Belichick said Monday that the Patriots would "let the league talk about that play. It's their decision."

A replay on the CBS broadcast showed that Bennett was slow to get up after the hit.

"Things happen in a game. It usually doesn't happen that way, but he apologized. He said he didn't try to do it," Bennett said after the game. "It's part of the game."

Burfict was also seen helping Bennett up after tackling him on one play.

A player's history can factor into potential NFL discipline. Burfict has been fined $204,329 since entering the league in 2012, not including three lost game checks for a total of $502,941 in base salary this season.

A decision on potential discipline for Burfict is expected no later than Wednesday afternoon, a league source told ESPN. NFL vice president of football operations Jon Runyan and his staff have been reviewing tape of the two on-field incidents.

Burfict has not been fined this season since returning in Week 4 against the Miami Dolphins. He was suspended for the first three games of 2016 for repeated violations of player safety in the Bengals-Steelers AFC wild-card game last season, including a hit on Antonio Brown that resulted in a concussion for the wide receiver.

Late in Sunday's game, Patriots tight end Rob Gronkowski was penalized for taunting. On the play before, he butted helmets with Burfict as emotions were rising.

Gronkowski said after the game that he hadn't seen Burfict's low hit on Bennett, and added, "It didn't affect anything."

During Brady's weekly interview on sports radio WEEI on Monday, the QB said he didn't see the low hit.

"You have to deal with that sometimes," Brady said. "I think we were dealing with that most of the day. ... I haven't seen it, so I'm sure I'll have some different thoughts."

Later in the interview, when asked if Gronkowski's taunting penalty is the type of penalty that is OK to accept based on the circumstances, Brady said, "It always gets kind of chippy with the Bengals. They've had a history of that with particular players on their team, and it just kept going back and forth. Gronk was making a bunch of good plays on them, and I'm sure they didn't like it.

"It's just one of those things. I'd rather us not take those. I'd rather us just be poised and get back to the huddle and make them pay on the scoreboard, but sometimes in football, it just happens."

Asked whether he views the Bengals as a dirty team, Brady answered, "I think they just play a tough, physical style, and when they hit you, they hit you hard. I don't say 'dirty.' I've never said that about any team. It's football. It's a physical sport. Some teams play more physical than others. The trademark of that team is to read the quarterback and break on the quarterback and hit hard. That's how it's been for a long time."

Burfict lunges at Bennett with dangerous hit to knee
Bengals LB Vontaze Burfict lunges at the left leg of Patriots TE Martellus Bennett in the fourth quarter of Cincinnati's loss to New England. 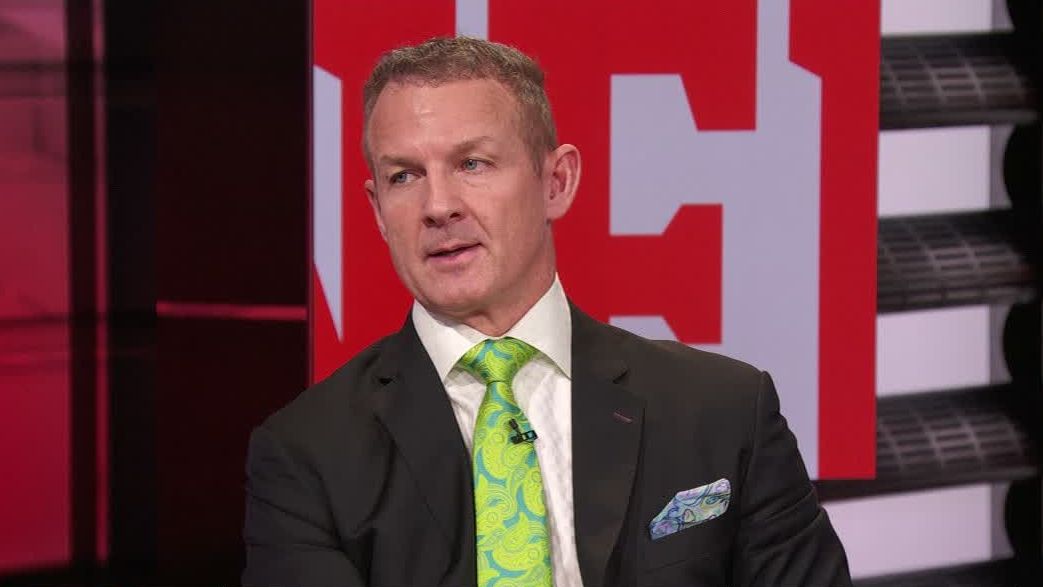