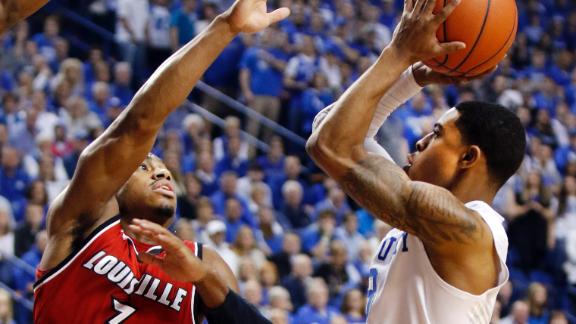 LEXINGTON, Ky. -- Tyler Ulis scored 21 points, and No. 12 Kentucky held off 16th-ranked Louisville's rally for a 75-73 win Saturday to give John Calipari his 200th victory as the Wildcats' coach.

Damion Lee, who led the Cardinals with 27 points, was well off on a potential winning 3-point attempt at the buzzer.

Kentucky (10-2) led by 16 points early in the second half before Louisville came almost all the way back. The Cardinals (11-2) had a chance to tie or take the lead with less than a minute left but Trey Lewis was called for traveling.

The Wildcats then committed a shot-clock violation to give Louisville one more chance.

Kentucky's second-leading scorer, Isaiah Briscoe, sat out after hurting his ankle during pregame warmups. Freshman guard Charles Matthews started in place of Briscoe, who averages 11.5 points, but it was Hawkins who gave the Wildcats a spark in his absence.

Hawkins hit a clutch 3-pointer and made two free throws in the final three minutes to keep the Wildcats in front.

In the latest installment of the rivalry, Calipari and Louisville coach Rick Pitino both received technical fouls late in the first half.

Calipari is now 8-1 against the Cardinals with Kentucky.

Poythress scored six of the Wildcats' first eight points to open the second half, stretching their lead to 52-36 with 17:49 remaining.

Twice after Louisville pulled within two in the last five minutes, Kentucky hit a big 3-pointer -- one by Ulis and another from Hawkins.

The Wildcats made a season-high 11 3s.

Kentucky: C Skal Labissiere, who started the first 11 games, came off the bench and finished with two points and three rebounds.

Louisville: Pitino had a 6-2 record against the Cardinals while coaching the Wildcats. He is 5-12 against Kentucky. Louisville has not won in Lexington since an 89-75 victory in 2008. ... Lewis scored 15 points.

Ulis, Kentucky hold off Louisville
Tyler Ulis scores 21 points to lead Kentucky to a 75-73 win over Louisville, John Calipari's 200th win as coach of the Wildcats.