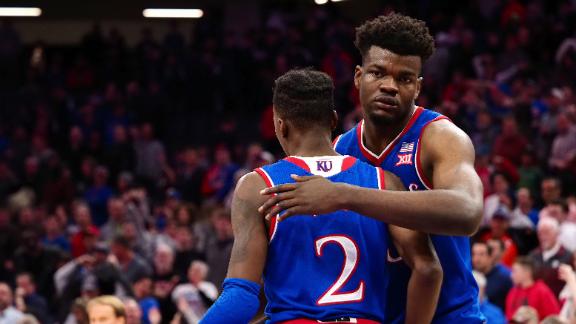 SACRAMENTO, Calif. -- Frank Mason III is mere months removed from his sensational Kansas career, and this time he sat courtside in his new arena as an NBA rookie ready to watch as a fan and offer some thoughts and encouragement to his old Jayhawks teammates who remain dear friends.

Mason provided a simple postgame message: Keep winning. Be aggressive on both ends of the floor.

"It's Frank," Devonte' Graham said, "we're in his building."

Udoka Azubuike certainly took charge on offense, scoring his team's initial 10 points and dunking seven times on the way to 24 points as No. 14 Kansas ran away from Stanford early for a 75-54 victory Thursday night.

Playing at the NBA Kings second-year Golden 1 Center with several Sacramento players sitting courtside, Kansas (10-2) had eight dunks and six 3-pointers in the first half alone while shooting 62.5 percent. Both programs wrapped up nonconference play with the second matchup of a four-game series between the schools.

Michael Humphrey had 20 points and seven rebounds for the cold-shooting Cardinal (6-7) as Stanford coach Jerod Haase faced his former school where he starred from 1995-97 under then-Kansas coach Roy Williams.

The 7-foot center dunked off the opening tip for his 43rd of the season and quickly slammed home another as he led Stanford all by himself, 10-8, to begin the game. The other Kansas players then got involved and the Jayhawks used a 21-4 run to build a 31-15 advantage -- shooting 13 for 18 for 72.2 percent.

Mason, last season's AP National Player of the Year and now shining with the Kings, was courtside along with some of his Sacramento teammates like Buddy Hield.

And Kansas drew quite a crowd to California's capital city, where fans cheered "Let's go, Jayhawks!"

"I couldn't believe it. It's the nicest building I've ever been in. I've never been in a building nicer than this," Kansas coach Bill Self said. "... It was a home game for us, it kind of felt like a home game."

The Jayhawks are 10-3 in the series but had lost two of the last three, winning 89-74 last Dec. 3 at Allen Fieldhouse. Stanford beat Kansas in the 2014 NCAA Tournament to reach the Sweet Sixteen.

The Cardinal weren't bothered by the pro-Kansas crowd.

"We want to play in arenas like this," Reid Travis said. "That gave us energy coming into the game I just wish we could have sustained it a little more."

Travis, Stanford's leading scorer, dealt with foul trouble and was held to a season-low 12 points after coming in with a 22.2 scoring average as Stanford shot 34.4 percent.

"I was a little disappointed in myself not having more success finding guys and still attacking that pressure," Travis said. "We're disappointed. We feel like we had a great game plan in place."

Stanford freshman forward Kezie Okpala was cleared to play for the first time after he made academic progress in the first quarter. Initially, he hadn't met Stanford's requirements out of high school and wasn't allowed to play because his grade from advanced placement calculus didn't meet the Stanford threshold.

He hit a 3-pointer during his second time on the court and finished with six points in 28 minutes.

Kansas: Graham (1,276) passed Haase (1,264) for 33rd place on Kansas' career scoring list. The Jayhawks improved to 10-2 -- or better -- for the third straight year and posted at least 10 nonconference victories for the fourth consecutive season and 13th time in Self's 15 seasons at the university. ... Kansas is 3-0 at neutral sites and 4-1 away from Allen Fieldhouse. The Jayhawks played in their third NBA venue already this season.

Stanford: The Cardinal, who faced their third ranked opponent this season, dropped to 0-11 against AP Top-25 teams during Haase's two seasons. Stanford hasn't beaten a ranked opponent since topping No. 11 Oregon on Feb. 13, 2016, at Maples Pavilion.