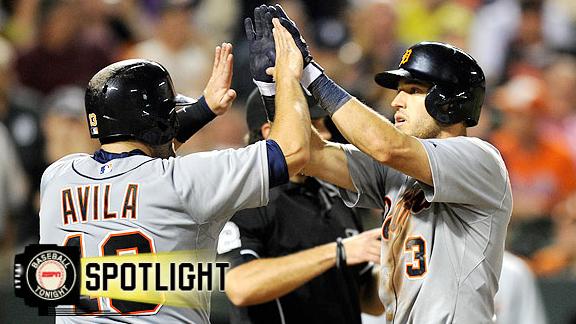 Major League Baseball will review an incident in Monday's game between the Detroit Tigers and Baltimore Orioles during which third-base umpire Paul Nauert briefly put his hand on Torii Hunter's face during a benches-clearing altercation, the Detroit News reported, citing a source.

Major league players are subject to suspension if they touch an umpire.

Both dugouts emptied onto the field after Hunter took exception to being hit in the ribs with a 94 mph fastball by the Orioles' Bud Norris just one pitch after Ian Kinsler's two-run homer gave the Tigers a 4-1 lead in the top of the eighth inning.

Hunter yelled at Norris, and as he made his way toward first base, the Tigers outfielder moved slightly in the direction of the mound.

That prompted both dugouts to empty, and relievers from both bullpens charged toward the infield. Order was quickly restored, and no punches were thrown.

During the incident, Hunter was taken aback when Nauert put his hand on Hunter's face as the outfielder was shouting in the direction of the Orioles' dugout.

"That's my guy," Hunter told The Detroit News of Nauert. "He was trying to cover my mouth. I've known him too long [to be upset]. He was just saying to me, 'C'mon, T. You're way better than that.' And he's right.

"I apologize to the fans for my reaction."

Hunter acknowledged that he was swept up in the emotion of the moment but said he probably wasn't going to charge the mound.

"It's like a pickup basketball game. There's a foul, and two guys argue," Hunter said. "There's a lot of adrenaline going. Once you calm down and think about the situation ... it doesn't make sense. I'm too old for this stuff. I've got kids in college. I can't be doing that."