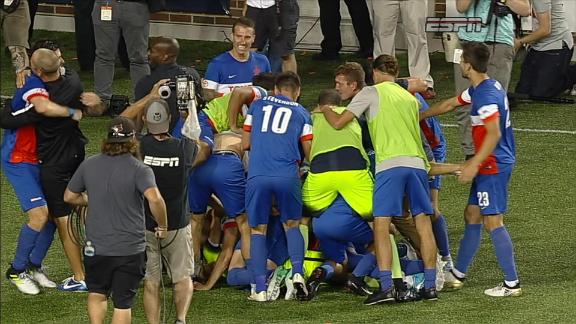 FC Cincinnati continued its fairy-tale run in the U.S. Open Cup on Wednesday with a 3-1 penalty shootout win over theChicago Fire to reach the quarterfinals.

The USL club made headlines after eliminating in-state Columbus Crew SC in the fifth round and needed penalties to sneak past a second-straight MLS club after a scoreless first 120 minutes.

Cincinnati had a goal controversially ruled out for offside late in the second half, while goalkeeper Mitch Hildebrandt made a number of fine saves to frustrate Bastian Schweinsteiger and the MLS stars.

AndHildebrandt was the star in the shootout as well, stopping attempts from MLS leading scorer Nemanja Nikolic as well as Arturo Alvarez and Juninho for another famous FC Cincinnati victory.

The nationally televised game drew 32,287 fans to Nippert Stadium in Cincinnati, one of 12 cities currently competing for an opportunity to move to MLS.

But Poku delivered three minutes into added time, turning homeVincenzo Rennella from close range to send Miami to the quarterfinals next month, when the club will host FC Cincinnati.

The other lower-division side still in the tournament did not fare as well, as the Sacramento Republic fell 2-0 to the LA Galaxy.

The Galaxy will next travel to meet the San Jose Earthquakes, who fought off the 10-man Seattle Sounders 2-1.

San Jose's Shea Salinas needed just six minutes to open the scoring, and things got worse for Seattle as Francisco Narbon was sent off on 35 minutes.

But though the Sounders were able to equalize through Aaron Kovar early in the second half, Danny Hoesen showed off remarkable control in the box before netting the 84th-minute winner.

Meanwhile, Sporting Kansas City advanced to the next round with a 2-0 defeat of Houston Dynamo atBBVA Compass Stadium.

Jose Ortiz put the visitors in front after seven minutes, but goals on either side of half-time fromDiego Fagundez and Brian Wright put the Revs in the lead for good.

New England will host the New York Red Bulls, whobeat the Philadelphia Union 5-3 on penalties after a 1-1 game.

After Sacha Kljestan gave New York the lead before halftime, Roland Albert equalized with just four minutes to play in the second half.

Revolution 2-1 DC United: Wright lifts Revs
Two goals in a span of four minutes would secure a narrow 2-1 win for the Revolution over DC United in the U.S. Open Cup.