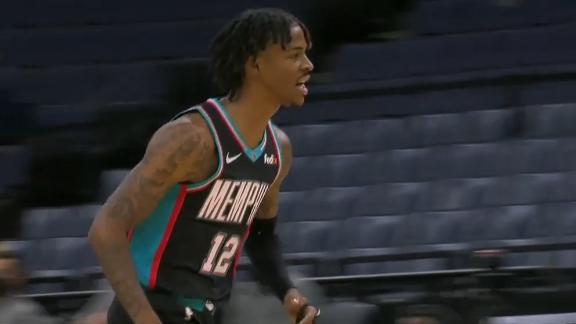 "I think the basic learning opportunity is how you've got to handle your business," Memphis coach Taylor Jenkins said about winning the second night. "Coming out every single night and you have to do it together."

The Grizzlies talked about the importance of bouncing back after the Friday loss to the Warriors and making sure they were more focused for the second game of the series. Morant said he took a more vocal role as compared to Friday's lackluster effort.

"I apologized (to Jenkins) for not being a leader for (Friday) night's game," Morant said. "I told him I take full responsibility for that, and (Saturday), I picked up my talk. Playing hard, encouraging guys, just telling us to stay the course."

The Warriors, already short-handed without guard Stephen Curry and frontline players James Wiseman and Eric Pascall, were dealt another setback with the absence of Kevon Looney. Looney, who played well against Valanciunas on Friday, was the latest to fall under the league's health and safety protocol.

Looney's absence left second-year 6-foot-10 forward Alen Smailagic to start and guard Valanciunas. While Smailagic, who was playing his third game this season, struggled with the Grizzlies center, collecting five fouls in 8 minutes on the court, Warriors coach Steve Kerr said the game got away in the first half.

"I was disappointed we let them off the hook," Kerr said. "We had every opportunity in the second quarter to take control of that game. We just made too many mistakes."


The Warriors led 100-99 with 2:43 left on Poole's 3-pointer, but Memphis answered with eight straight points, Morant scoring on an 8-footer to start the rally and connecting a couple of free throws to seal the win with 20.7 seconds remaining.

Whether from stout defense or fatigue from the second night of the back-to-back, neither team shot well in the first half, both connecting on less than 38%. The Grizzlies added eight turnovers to their problems as the Warriors led 51-49 at the break.

The shooting woes would continue for both teams throughout the game, Memphis shooting 39% for the night, while Golden State managed only 34%.

Warriors: Smailagic scored his first points on a 3-pointer 19 seconds into the game. It was his only basket of the night. ... Poole started his second game of the season in Curry's spot.

Grizzlies: Memphis had been held under 104 points in four of the previous five games. ...F Justise Winslow, who returned from injury on Feb. 20, was available for the first time on the second game of a back-to-back. ... F Kyle Anderson had a four-point play in the first quarter - the first of his NBA career. ... Morant passed Shane Battier for 13th on franchise assists list. Battier had 717. ... Tied a season high with 60 rebounds.


With Looney out under the league health and safety protocol, the question became what can the Warriors do to address the situation. Kerr noted that Memphis is located just across the state line from Mississippi, where the state has opened vaccinations for anyone 16 and older. "Believe me, the thought of getting on a bus, taking our team 15 miles away from Memphis to get vaccinated crossed my mind," he said.

NO FIRM RETURN FOR CURRY

Curry made the trip to Memphis, but was not active for either game. Coach Steve Kerr said because Curry has not done anything basketball-wise since the Wednesday night injury in Houston, the return includes everything from rest to game tolerance to strength and conditioning. "Our training staff is all over it," Kerr said. "When he's ready, he'll be back."