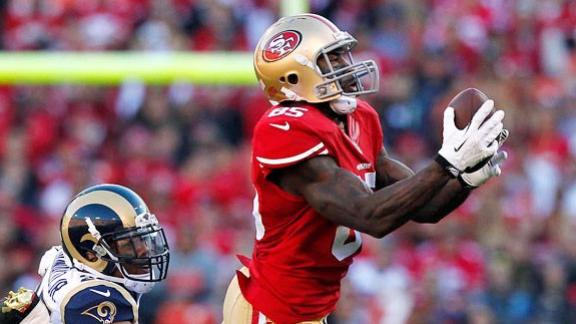 "I'm disappointed in that decision for them not to be here. ... [It's] not the decision I envision being the 49er way," coach Jim Harbaugh said Tuesday.

Davis said in a radio interview last week that he planned on attending the minicamp then changed his tune earlier this week, indicating in a guest column for Sports Illustrated's MMQB that he would hold out.

"In 2010 I signed a five-year, $37 million contract extension with $23 million guaranteed. It was the biggest contract for a tight end in league history," Davis wrote. "Four years later, and I'm playing at a higher level than I was then, which brings me to why I'm holding out. It's all about getting paid what you deserve. It's not that complicated. I want the 49ers to win the Super Bowl, and I want to be on the field this summer working towards that goal, but I have to worry about my future first."

With Davis and Boone now officially holding out, the 49ers can start fining them. Players can be fined nearly $70,000 if they miss all three days of the minicamp.

Boone is a key player on the offensive line. With Anthony Davis recovering from a shoulder injury and Daniel Kilgore and Marcus Martin vying for the center job, the offensive line may have some rough spots in the summer.

The team also was missing cornerback Eric Wright, who announced his retirement Tuesday after seven seasons.